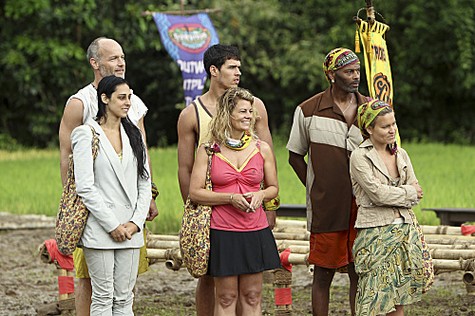 Tonight on CBS Survivor Philippines airs with a whole new episode called “Create a Little Chaos.”  On tonight’s show fearing that they may be the next to go home, an aspiring Sole Survivor shares a shocking story from their childhood. If you missed last week’s episode we have a full and detailed recap for you here!

On last week’s show an in-jury-prone ex-Survivor player incurred yet another injury during a bruising immunity challenge; one of the more paranoid castaways considered an improbable alliance; and another castaway provided a surprise gift.  When it was time for the vote, no surprise that Russell voted for Angie and she for him. It was all up to Malcolm and Denise, who had to decide who they were  going to send home? The third person voted out was Angie. What a shocker, Malcolm sent his snuggle buddy home and Russell was thrilled that he gets another chance to redeem himself.

On tonight’s show Russell fearing that they may be the next to go home, shares a story of how he was bullied when he was 8 years old.  Russell feels his looming threat of elimination, so sets out to find the elusive Immunity Idol.

Can the Matsing tribe break the trend and not head back to tribal council again tonight?  It would make it the forth time in a row.

Tonight’s episode is going to be filled with the usual drama, which you won’t want to miss. So be sure to tune in for our live coverage of CBS’s Survivor Philippines – tonight at 8PM EST!  While you wait for our recap, hit the comments and let us know what you think of Survivor Philippines Season 25, so far?  While you wait for the recap, check out the sneak peek of tonight’s recap below!

Tonight’s episode: At Matsing, the three remaining tribe mates are trying to light a fire, it’s pouring rain and their fire went out. Russell is busy planning the greatest comeback with Denise and Malcom, he’s not quitting yet.

At Kalabaw, the rain has finally let up and everyone gets busy doing chores. Since Jonathan has the immunity idol, Jeff has decided to align with him, making the two really powerful and Carter is going tag along to ensure his safety in the game. Meanwhile, the women are looking forward to the merge so they can bring more on to their side and increase their numbers.

Russell is a little suspicious of Malcolm and Denise because they haven’t talked about what happens next with their tribe. In the meantime, since he has the clue for the immunity idol, he is still searching for it because he’s certain he is going to need it. Denise caught Russell covering something up with a banana leaf and is wondering if maybe he found something that he is trying to hide. Denise confides in Malcolm and while Russell is at the beach, they go through his belongings and find nothing.

There is a rift between RC and Abi-Maria because RC broke her trust over the hidden immunity clue. Meanwhile Pete is hoping the rift continues because he wants RC gone since she is a strong player. Lisa is happy, the heat is off of her for a change.

Time for the Immunity Challenge, one at a time the tribe mates have to carry two pots or rice, once they are collected they have to put them on posts and smash the pots with a wrecking ball, the first tribe to finish wins a steak BBQ, the second tribe to finish wins a few veggies and a wok to cook it in. Because there are only three people left on Matsing, the other tribes have to sit out three people each, they decide to sit out the women.

Tandang has the lead with Matsing behind them, Kalabaw is desperate to catch up. Tandang wins immunity and steak reward, Kalabaw wins immunity and reward, Matsing loses for the fourth time in a row. Russell is pissed and starts talking to God in front of everyone, Jeff tells him that he’s not a super hero. Russell replies with telling Jeff that he was made with God’s hand and he is excellence, he is not supposed to fail.

At Matsing there is disbelief, frustration and Russell is really worried that he is going to be voted out. Russell tells Denise that he is pissed that they lost – he then goes on to confide in her that he got beat up as a child and used to go to school scared, long story short, he caught one of the guys that used to beat him up and punched him right in the face. Russell didn’t like the way the other boy looked at him and from that day forward he didn’t want to cower from anything.

Malcolm and Denise have Russell convinced that he is the swing vote and they want to vote each other off.

At Tribal Council, everyone has there bags packed and claim they are unsure who is going home. Jeff does the rounds and asks everyone why they should stay in the game and they all have their reasons why they are the best to stay in the game.

Time to voter, Russell votes for Malcolm and  Malcolm for Russell, it’s all up to Denise’s vote.

The fourth person voted out of Survivor Philippines is Russell.