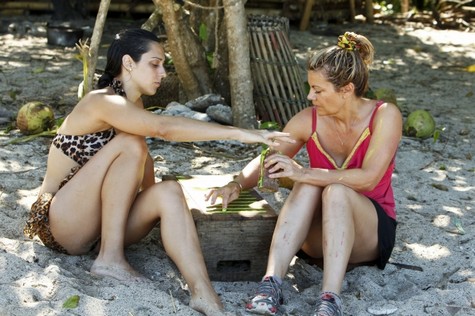 Tonight on CBS Survivor Philippines airs with a whole new episode called “This Isn’t a We Game.” On tonight’s show an injury prone castaway incurs a fresh battle wound during an intense Immunity Challenge. If you missed last week’s episode we have a full and detailed recap for you here!

On last week’s episode Jeff Kent continued to struggle with his knee injury, a heavy object/puzzle challenge pushed the Survivors to their maximum capacity and Lisa Welchel was  further ostracized by her tribe.  At tribal council Roxy told Jeff that her fellow tribe mates put too much effort in at camp and she didn’t like it.  After that statement, no surprise, Jeff tallies the votes; Roxy 3, Angie 1 – that was enough, the second person voted out of Survivor season 25 was Roxy.

On tonight’s show  an in-jury-prone ex-Survivor player incurs yet another injury during a bruising immunity challenge; one of the more paranoid castaways considers an improbable alliance; and an-other castaway provides a surprise gift.

Can the Matsing tribe break the trend and not head back to tribal council again tonight?  It would make it the third time in a row.  Roxy who was voted out last week says she is not sure that Matsing can pull it together.  Roxy thinks that Matsing focuses more on working hard around the camp and not hard enough at winning challenges.  What do you think, do you agree?

Tonight’s episode is going to be filled with the usual drama, which you won’t want to miss. So be sure to tune in for our live coverage of CBS’s Survivor Philippines – tonight at 8PM EST!  While you wait for our recap, hit the comments and let us know what you think of Survivor Philippines Season 25, so far?  While you wait for the recap, check out the sneak peek of tonight’s recap below!

Tonight’s episode: Roxy just exploded at the last Tribal Council, she went out with a bang. Russell thinks Roxy was right about the showmance brewing between Malcolm and Angie, it’s a strong alliance to watch out for.

At Tandang, Abi-Maria is worried that she may be in trouble in the game because of her knee injury, so she is taking the day to relax and get better. RC keeps trying to convince Abi-Maria that she is safe and has nothing to worry about, the two get into an argument and RC walks away. RC heads right into the water with Mike and starts complaining. Meanwhile, Abi-Maria shares with Pete that she and RC have the immunity clue and she wants to find it before RC does.

Peter approaches Lisa, he tells her that the tribe wants to get rid of her so if she aligns with him and blind sides Mike, he will protect her.

Jeff notices that there is an emblem that was on top of the rice box that is now gone, the tribe is thinking that Jonathan has it and everyone’s pissed off about it – time to blind side Jonathan and send him packing with his idol.

Denise notices that there raft is gone and Russell is shocked because he thought it was secured. At the Immunity Challenge, the tribes have to dive in the water to retrieve puzzle wheels, the first tribe to finish the puzzle wins immunity and a massive fishing kit that includes a canoe. The second tribe to finish wine a smaller fishing kit, not as big, but pretty nice and they also get immunity.

Angie is going to play against Russell’s lack of drive during the challenge to turn her tribe against him and hopefully save her for another week.

At Kalabaw Jonathan thinks Jeff is weary of him, so he approaches him and tells him that truth that he has the idol. Jeff is happy he approached him, he has to figure out what is best for him.

Meanwhile, at Tandang Artis is disappointed that they didn’t win first place and he is fed up with Mike, he wants him out. Abi-Maria is still looking for that immunity idol and she finally does it, she figures out that it is the emblem on top of the bag of rice.

Matsing is back at camp and Malcolm is upset with the group of goons that he is stuck with, he thanks God for Denise. Angie couldn’t even get the first puzzle piece that was the shortest dive and Russell who looks as strong as an ox, totally tanked. Denise thinks it is a ridiculous choice to keep Angie, but she doesn’t know if she can convince Malcolm to vote out Angie.

Malcolm is torn, he doesn’t know who to vote out and is finding it tough to turn against Angie. At Tribal Council, Malcolm tells Jeff that he is heartbroken about how poorly is team is performing. He goes on to say that Russell and Angie struggled during the challenge and one of them has to go home. Russell throws Angie under the buss and tells Jeff that she can’t hold a candle to him, he put his life on the line the last time he was in the game. Angie is upset and crying, she can’t compete with Russell.

It’s time to vote, no surprise that Russell votes for Angie and she for him. It’s all up to Malcolm and Denise, who are they going to send home tonight? The third person voted out is Angie. What a shocker, Malcolm sent his snuggle buddy home and Russell is thrilled that he gets another chance to redeem himself.