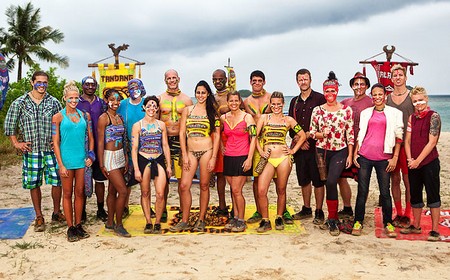 Survivor became the hottest reality television show on the planet when it debuted in late 2000. It quickly drew one of the biggest reality television audiences in history, only to be surpassed by the juggernaut American Idol’s second season. Jeff Probst became a household name and changed the way we understood television hosting. Mark Burnett’s masterpiece grew up and became as traditional and familiar as the Brady Bunch.

The format was simplistic in design, but exquisitely executed – 16 ordinary Americans are dropped off on an island, where they have to outwit, outplay and outlast to become the Sole Survivor. 24 Americans currently belong to the Survivor Winner’s Club, an elite group of people who survived for 39 days in some of the harshest conditions known to ordinary people. These 24 Americans backstabbed, lied and connived their way to a cool $1 million and changed their lives in the process.

Several of the past non-winners achieved a level of fame in their own right, such as Elizabeth Hasselbeck (famous for her battles on The View), Rob Mariano, Amber Brkich, Ethan Zohn, Jenna Morasca, Johnny Fairplay and Russel Hantz. Almost everyone who ever touched the Survivor television show as contestants became changed by the experience, but according to new reports, Survivor has some startling secrets in its shell-filled closet and it isn’t as life changing as you might expect.  In order to celebrate the milestone 25th season of Survivor, Celeb Dirty Laundry decided to do some serious investigative reporting and try to figure out if the show is all show and no reality.

Most of the contestants on Survivor are not chosen by filling out an application form, in fact, almost none of the contestants are chosen in this manner. The Survivor producers use these application forms to find needles in the American haystack and include a few contestants from the pool of “ordinary talent”. Season 18 contestant Erin Lodbell was chosen by a casting assistant and flew to Los Angeles to partake in the auditioning process. Jenny Guzon-Bae, a season 13 contestant, was phoned by a Survivor casting assistant after her real estate profile was spotted on the internet. Jenny was more than surprised when she received a call from Survivor, because she never applied to be on the show.

There are certain roles which need to be filled each season. We have seen this happen time and time again, where several of the contestants are so outnumbered by younger, faster and stronger contestants that they get voted off during the first week of the competition. Kelly Goldsmith, from season 3, applied to the show to fill “The Bitch” role which was perfected by Jerri Manthey in season 2. According to Kelly, she received a call for the L.A. auditions and had to meet with Jeff Probst and Mark Burnett. Her audition wasn’t what she was expecting and after donning a cheerleader outfit for her audition tape, Burnett remarked at the audition, “Your ass is much bigger than I would have expected.” Was this a chauvinist casting process or an ingenious ploy? Kelly left the audition room without any hope of ever appearing on the show, but she was called back by one of the staffers and was told, “A real bitch would have gone off on Burnett for saying she had too much junk in the trunk. You need to play another angle if you expect to stay.” Kelly was given “The Nerd” role and made her obsessive dream of appearing on Survivor come true.

Allegedly, the producers also tell the contestants what clothes to wear on the island. They do this to create a fluent editing process and to drum up appeal from the viewing audience. John Cochran, last season’s vilified nerd said, “They tell us what to wear. The lady on the phone said, ‘Justin Timberlake wears sweater vests’.” The sleeveless sweater vest Cochran wore on the island wasn’t his – it was chosen by the producers.

The food situation on Survivor is as real as it gets. The contestants are pushed to their psychological limits without food and it makes for great television. Erin Lodbell also had a stretch on Exile Island during her season, but was left without food for the remainder of her stay. A sound man luckily handed her a candy bar in between the switching of camera crews. The fire making fun, on the other hand, is not very true. The contestants are usually seen in the edited version of the show as larger than life ordinary citizens who just made fire from a lonely Lego block and the eye of a scorpion, but the viewers at home do not realize that the contestants are usually assisted in the fire making process  –  the producers have gone so far as to have a camera man flick the lighter to burn the husks. In the famous words of Jeff Probst, “Fire represents life on the island.” Yes, synthetic life, but life nonetheless.

The famous Survivor challenges are also cut to the core with the latest production revelations. Allegedly, the producers can and will switch the order of the challenges “to increase the likelihood of getting the outcomes they want”. A cast member who outstays his/her production value will usually be given a challenge which he/she won’t be very good at. For example, a stupid contestant will be given a puzzle, while a scrawny contestant will be given a physical challenge. We’re not sure if these “switched” challenges are only post-merge, or if the same is done to the pre-merge challenges. The aerial shots of the contestants diving into water, running, crying, kicking, screaming and breaking their legs, are not real. The B-film (the nature, aerial, non-contest shots) is filmed before the contest even begins. The Survivor staff members (Dream Team) give the challenges a run to see if all of the mechanics work; it is with these test-runs that the aerial shots are filmed.

Survivor super fans have all wondered how the contestants are so easily able to understand a challenge every episode from a few Jeff Probst sentences. They don’t. They are taken aside by Survivor producers and a CBS representative and are given a complete description of the course, the contestant dynamics and the choices they could make during their challenge. They walk through the course with the producers and the CBS rep until they’re one hundred percent certain that they understand the rules. The challenge is also stopped and the cameras are switched off if the contestants do not understand a specific rule, but the challenge is re-taken from exactly that same spot while the contestants are told to remain still and silent. The CBS rep is always present at every challenge and Tribal Council to ensure that the contest is fair. He/She is allowed no input in the contest, nor is he/she allowed to discuss the game with any of the contestants.

There have also been rampant rumours of vote rigging during the 24 season run of Survivor, with at least one contestant who sued Mark Burnett for alleged vote rigging during the first season. The previous Survivor contestants have all spoken out about the voting process and you’ll be surprised to learn that it isn’t what you think it is. We usually see the contestants walk into Tribal Council, chat to Jeff about their life on the island, bitch, moan and then vote. This is not how it goes down. Allegedly, the producers stop filming during the Tribal Council period and offer the contestants several hypothetical scenarios. The contestants revealed that those “discussions” usually assisted them in making the final voting decisions, but that no-one was ever voted off by producers. The vote was still in their hands, even though the producers took each contestant aside and discussed the potential outcomes of the Tribal Council vote. We also know that the editing process of Survivor is in shambles. Many contestants revealed in the past that the words on screen weren’t their exact words. According to Cochran, his sentences were edited so much during a certain scene that it came across as a compliment towards his rival Coach, when in reality he was speaking about Coach’s trickery. Another Survivor spoke out about this and said, “I haven’t heard anything like that. You’re not put in a room with booze. You’re stripped of all your luxuries. Survivor is one of the purest reality shows.”

Uh-oh! Survivor sounds more like a chore than a game to us… To this day, CBS still denies all the production secrets of the show. What do you think? Could Survivor actually be one of the most bogus reality television shows in the world? Could it even surpass Dancing With The Stars, X-Factor and The Voice in “pure” fakeness? Let us know in the comments below your thoughts on these revelations. Have you ever tried out for Survivor? We’d love to hear about your experience.