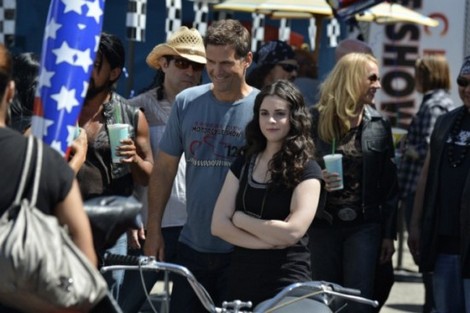 Tonight is an all new episode of ABC’s Award Winning series Switched At Birth. On tonight’s show called “Tree of Forgiveness” Toby is caught stealing a statue but is let off with a warning once it is revealed who his father is. Bay is forced to paint a church mural as punishment for getting a traffic ticket.  If you missed last week’s episode called “The Shock of Being Seen” you can find out full and detailed recap here!

On last week’s show Daphne began to bond with her new boss. Her new boss, Chef Jeff, asked her to stay late one night. Meanwhile, Bay used Angelo as her excuse to get around John’s rules. And Kathryn was upset when Regina got all of the attention in her interview for the new book.

On tonight’s show Daphne tries to ignite a spark between Robin and Emmett at the bike show held at John’s carwash.   Emmett meets a cute motorcyclist (guest star Ashley Fiolek). Meanwhile, John is livid when the car wash is tagged, and Kathryn tricks Toby into getting out of the house.

Bay’s new friend Zarra gets into an argument, John & Kathryn find out about Bay’s secret street art, and Daphne gets caught up in a love triangle between herself, Chef Jeff, and Melody.

Last week Bay proved to be quite the artist, tagging a wall at her dad’s car wash in order to make her way into a teen tagging group. She’s desperate to earn their respect and her father is furious with these “hoodlums” damaging private property. Her father doesn’t understand why she takes the whole thing so personally and it’s clear he’s not going to know that she was responsible any time soon.

Kathryn tries to semi-force Toby into playing his music for a bunch of biker dudes in order to get in front of a live audience again. He is completely uninterested and tells her that he’s very happy just playing for himself.

At the bike show at John’s car wash, Emmett meets Robin, a young, blonde, deaf girl who seems to really want to get to know him. Daphne wants to play matchmaker, think Robin is the perfect girl but Emmett reminds her that Bay is still perfect for him.

Angelo really wants to try to salvage some sort of relationship with Daphne but his attempts at kindness are leaving her cold until finally she tells him that she has no interest in even being friends. It looks like no one has very much interest in having Angelo around with the exception of Bay.

Bay and her new friend Zarrah are doing a huge mural in a usually empty alley when of course a cop rolls up. He does absolutely nothing but pat the girls down, why I don’t know. He already could have arrested them so I’m guessing he just wanted to cop a feel. Anyway, he sends Bay packing with a warning when he realizes that she is John Kennish’s daughter.

Kathryn takes her forceful way of helping to another level and totally sets Toby up. Since he didn’t want to play guitar for bikers she arranges for him to play with a church group instead. Meanwhile Bay actually talks to Emmett and tells him about the fight with her dad.  He suggests she just come clean and tell her father that she is responsible for the tagging because maybe then he’ll see it differently. Maybe then he’ll see it as art and not just filth.

Angelo is doing god knows what around the Kennish house because I swear he is their Italian handyman by trade rather than father of sorts to both Bay and Daphne. Anyway, he has a nailgun accident and ends up with his arm gushing. You can count on Daphne to over act her way through the scene as she tries to convince him of the obvious- he needs to go to the hospital. Once they arrive she denies being related to Angelo which leaves him looking like someone smooshed his puppy.

Kathryn manages to drag Toby through the church door but he tries to leave before performing. She takes the (kinda sorta) stage and begins singing, probably knowing that he’ll join in on guitar. As they are singing on the other side of town Bay tells John that she “defaced” his wall with her artwork. She sees it as art and she tries desperately to make him see it as she does. He tells her he feels like he doesn’t know who she is.

Bay tells Emmett how the chat with her dad was a disaster and pretty quickly realizes that Robin is very interested in him. Bay tells Emmett to go and spend time with her, kind of nudging him towards moving on.

Angelo finally loses his temper with Daphne and says he’s tired of her looking at him as the guy that left her as a child. He’s there now and would really like the chance to make up for his mistakes. Angelo is beginning to sound like the voice of reason, as he takes his next tirade to Regina. He wants a fresh start with her also or this will never work.

Tonight’s show wraps up with John and Kathryn on the couch trying to figure out how many tagging incidents Bay has been involved in. Tune in next week to see what punishment gets dished out.