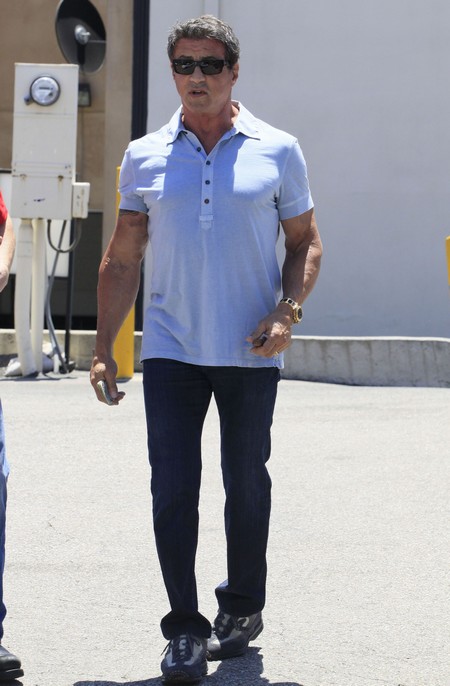 The nephew of Sylvester Stallone has lashed out at the star in the wake of Sage Stallone‘s mysterious death. Sage was found dead in his Studio City home on July 13 2012 and police told TMZ that evidence pointed to an accidental death.

Edd Filiti (18) claims Stallone had failed to return his son’s calls when he wished his father happy birthday on July 6. Edd did what so many of us have done in time of severe trauma – he went on Facebook to air his anger at Sylvester Stallone and his wife, Jennifer Flavin. Filiti is Sage’s cousin and the son of Stallone’s half-sister Toni Ann.

In a series of livid Facebook status updates, Filiti wrote, “What did he do wrong, say happy birthday[…] Neither you [Stallone’s wife Jennifer Flavin] or he could return a phone call, which is all he wanted, his father. I know you don’t care what happened, but you’ll care when your (sic) squirming under the burning magnifying glass of public opinion.”

Filiti continued in the rant with, “You people make me f**king sick!”

Filiti did not end there, but irately and wrathfully lambasted Stallone’s wife, “Jennifer, I’m glad your stepmother workload has lessened, one less member of the family to keep away, one less distraction. Jennifer Flavin, you won. Your tore this family apart and got your trophy, Congrats! Like you told my family, ‘I’m Sly’s family now, he doesn’t need you anymore.’ Let’s see how much he needs you after this.”

A source close to the family revealed exclusively to Celebuzz.com, “Sage was not allowed in his father’s home and he admitted to other family members of his devastation that he’d seemingly been cut out of his father’s life,” a family friend revealed. Sage idolized his father but they had become estranged in recent time. It crushed him.”

An autopsy was carried out on Sunday, but toxicology reports are only due back in ten weeks, until then we can only speculate as to what happened to the 36 year old film maker at the time of his death.

Meanwhile, the Stallone family reached out to the public in a statement and said, “When a parent loses a child there is no greater pain. Therefore I am imploring people to respect my talented son’s memory and feel compassion for his loving mother Sasha [Czack]. This agonizing loss will be felt for the rest of our lives. Sage was our first child and the center of our universe and I am humbly begging for all to have my son’s memory in full left in peace.”

This whole tragedy is a voyeuristic glance at the parenting of one of Hollywood’s most well-known actors. It is also a catastrophic blow to the Stallone family. Filiti’s rant on Facebook is an understandable method to cope with the difficult situation, but the loss of a loved one cannot be justified by regrets and finger pointing. We truly hope, for the sake of Sage Stallone’s memory, that Sylvester Stallone is not the one to blame for his death. It is hard enough to deal with the loss of a child. The public scrutiny which Sylvester Stallone will be experiencing will be an added stressor to an already volatile situation.

Let us know in the comments below if you think Edd Filiti is speaking the truth.