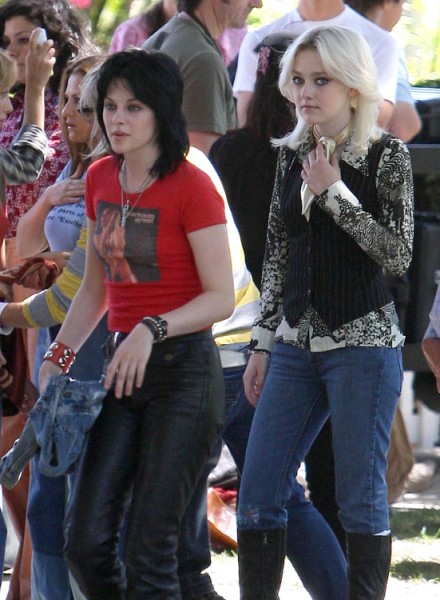 Kristen Stewart can’t catch a break. She was public enemy number one after cheating on Robert Pattinson earlier this summer and now that she’s reunited and happy again and the smoke has finally begun to clear, she’s a dang ‘ole lesbian with Dakota Fanning.

Dakota recently gave an interview with Instyle UK where she basically dragged up Kristen’s cheating past only to defend it. Good friend, right? Not so fast. A Blind Item is making the rounds saying Dakota isn’t so quick to defend her ex-bestie when a reporter isn’t around. In fact, she might even be a little jealous that Kristen choose to go back to Robert instead of hooking up with her!

THESE two young film actresses – they’ve co-starred in a huge franchise and one bomb together – like to get drunk and fool around. But now that one of the ladies is back with her boyfriend, the other has been left out in the cold – and she’s telling everyone who’ll listen that not only is the popular star a cheater, she’s also a lesbian! Who are they?

OK, obviously Dakota Fanning and Kristen Stewart, right? It makes sense since they were in The Runaways and The Twilight Saga together and the timing for this blind item in on point because of Dakota’s cover. But is this full of shit? I tend to think it’s just piggy-backing off the fact that Dakota and Kristen had to make out for The Runaways and there have always been these odd rumors that Kristen and Rob beard for each other because Kristen’s a bisexual and Rob is really in love with Tom Sturridge. None of that has ever held water with me because Kristen dated Michael Angarano for years before Rob and Tom Sturridge just made a baby with Sienna Miller. Am I naive? Maybe.

But that doesn’t rule out Dakota’s animosity. She could have feelings for Kristen and have a warped sense of what really went down on The Runaways set, right? Again… I doubt it. Dakota’s an easy target because she hasn’t had many boyfriends and just made those comments about not needing a guy in her life. She’s focused on school and work. That doesn’t make her a lesbian. And she was one half of the cutest couple of ALL TIME. She allegedly dated Freddie Highmore a couple years back and I was all about them going the distance because they seemed like the highbrow Justin Bieber/Selena Gomez but alas it didn’t last. The fact that I’m obsessed with teenage relationships is only mildly pathetic.

So I’m just not buying the Kristen Stewart/lesbian spin. What about you? Were Dakota Fanning and Kristen Stewart lovers when the cameras stopped rolling?