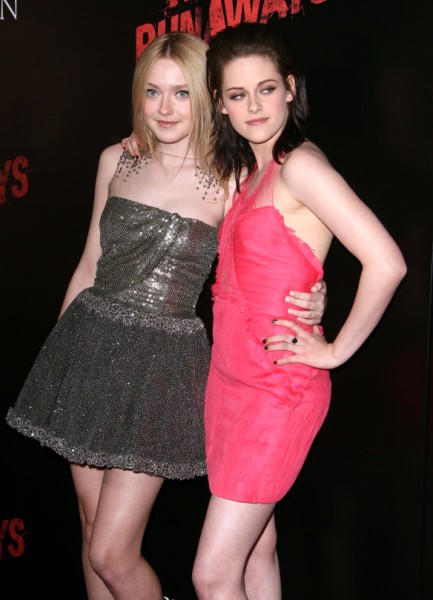 In the upcoming December issue of InStyle UK, Dakota Fanning has some choice words on Kristen Stewart’s cheating past. Don’t freak out. She’s actually being a good friend and defending Kristen although I can’t think Kristen is super fond of the idea of Dakota talking about her scandal to begin with but whatever. The interviewer asked the question and Dakota obviously thought she could do more good by giving a bitchy response than just saying “next question, please.”

She told the mag: “Everyone thinks they have the right to, you know, publicise the struggles and sadness and heartbreak and all of that. It’s like, why do you think you are the authority to judge people’s experiences?”

Oh because it’s fun and the dirty deed took place in a Mini Cooper. That’s why!

I actually love Dakota Fanning so I can’t come down too hard on her. I’ve been a fan since I am Sam and thought she was amazing in Man on Fire. Loves. Loves. I felt bad for her for awhile because I always thought she was Natalie Portman’s heir apparent in the child star world but then she got a lot of backlash for the rape scene in Hounddog and seemed to get passed up by other actors her age like Emma Watson and even Kristen Stewart. But instead of going the Amanda Bynes freak out route she’s managed to stay cool and grab roles where she can and is even going to college full-time at NYU so I give her mad props. And BTW, she (along with Michael Shannon) was the best part in The Runaways. Kristen Stewart didn’t stand a chance.

But back to the interview. I’ve got to chalk it up to bad timing. It probably took place a couple months ago when Kristen and Rob were still in that weird stage and the worldwide hatin’ was still going pretty strong. Why else would Dakota remark on old news? Unless… unless Dakota and Kristen are actually frenemies. Maybe Dakota is annoyed she’s getting passed up for roles by Kristen’s lesser talent and is throwing some shade because she can? Sounds fun but I doubt it’s true. I just can’t imagine my sweet little Dakota doing something like that!

Do you think Dakota’s being a loyal friend by telling everyone to mind their own business? If Dakota Fanning says Kristen’s problems are her own problems should we assume it’s coming from a good place and not a backhanded slap?