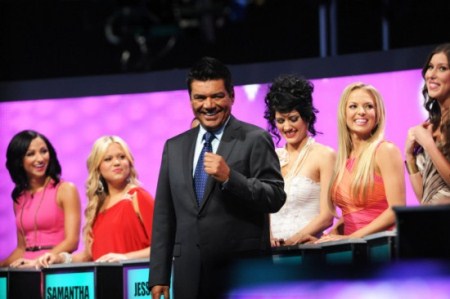 Tonight on FOX is an all new episode of Take Me Out. On tonight’s show 30 single women continue their search for a match. If you missed last week’s show, we have a full and detailed recap here for you.

On last week’s episode, the first guy was Danny from Hawaii and he choose the song “Somebody To Love” by Queen to make his grand entrance in front of the women. Twenty Nine girls are in it, except Diana. In Danny’s video he reveals that he does a lot of charity work and he’s in a band with a lot of groupies hanging around him. With the mention of the groupies, the women dropped out like flies.

Justice from California loves rock climbing, he is really into computers and motorcycles.  Justice also moved in with his grandmother and loves to wear his kilt, he has a Scottish heritage.  Well, that just spoiled it for seventeen women, there are only three left. Justice reveals that he works in a movie theatre and that is it for him, a total blackout; all the women want nothing to do with him.

You can see that the show is a lot of fun. So how did Take Me Out do in the ratings?  Well it’s maintaining summer ratings to keep it around for a couple more weeks.

On tonight’s show the 30 women continue their search for their summer fling on the provocative and hilarious dating show. One guy wants to turn their world “upside down”, you can take a peek at the preview below to see how he does it.

RECAP: Our first bachelor up tonight is Kenny.  He swaggers out to Mario’s song, Let Me love You.  At first glance, all the ladies keep their lights on and are interested.  Kenny is a romantic guy that holds doors for his lady.  He used to play arena football and now he works with kids in an after school program.  He also hosts at a niteclub which caused some lights to go out.  He’s also a licensed massage therapist but he insists he’s professional.  Kenny has ten ladies to choose from, not bad at all!  He leaves Marisa and Nicole’s lights on and says he likes their natural beauty.  His one question to them, “How can you hold my interest?”  Marisa wants to try something new with him and Nicole offers to go to the club to do body shots off of him.  Kenny chooses Marisa, of course. He says she caught his eye early on.

Danny and Sauna were matched up last week and so now we get a peak at their date.  They boogie boarded a bit and he serenaded her with a special song.  They think it could be a love match.

Phil’s up next and his song choice is Ramblin’ Man.  He’s a big guy that describes himself as a teddy bear. Unfortunately, he’s a truck driver which not all the girls like.  In fact only three girls are still in the game.  Phil likes football and video games which left him with a date with Kelly, because he had no other choices left.

Okay. Aaron is snokin’ hot and comes out to Nelly’s Hott in Here.  He looks like Adam Levine.  Of course he’s a model.  He loves to a fish and insists that he’s not a pretty boy. His talent is doing a hand stand.  Yowza they are so impressed (note the sarcasm).  His final two are Janea and Jenny.  He wants to know where their ideal romantic vacation spot is.  Janea saysAustralia and Jenny wants to take him out of this world. He chooses Jenny.

The last guy, Sebastan, makes quite an entrance to Pitbull’s, I know You want Me.  He is pushing his geekishness, complete with a bowtie.  There was a blackout.  All lights went out by the time the girls heard that his eleven year old daughter is the love of his life.

Tune in next week to see if the Flirty Thirty girls meet their match!