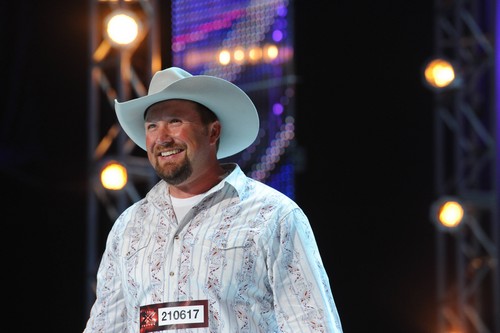 Tate Stevens took the stage tonight on THE X FACTOR USA for his Top 6 video performance.  Tate Stevens sang “Livin’ on a Prayer”  by Bon Jovi for his unplugged song.  Tonight’s show the top 6 performed live in front of coaches Simon Cowell, Britney Spears, Demi Lovato and AJ Reid for America’s vote and to make it another week.

Judges comments:  Britney thinks he’ll be a huge country star. Demi also believes that she’ll be buying his album some day but he missed the high note. Simon wants him to choose his own material. The audience seems to completely disagree with the judges.

Tate Stevens is wrapping up the acoustic portion of the show and he’s probably going to bring the house down with Bon Jovi’s Living On A Prayer.  Vote for Tate Stevens at 1-855-THE-XF-06