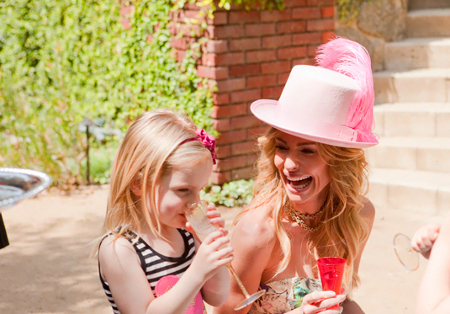 It’s been a year of change for Real Housewives of Beverly Hills star Taylor Armstrong after her husband, Russell Armstrong, committed suicide last August. Now, almost a year later, Taylor says that the couple’s daughter, Kennedy Armstrong, is glad that her father is dead. Russell had a history of being violent towards Taylor and his mounting debts were supposedly the reason for him hanging himself in the couple’s home.

“She’s more open and joyful since his death. She’s more outgoing than she was during his lifetime. She was feeling my anxiety. I’ve worked closely with psychologists with her, and I’m keeping tabs on her. I will say, ‘Don’t you miss daddy?’ And explain and remind her about positive things. I hope she’ll be proud of me.”

Taylor has gone on to write a book about her experience, Hiding From Reality, which describes her troubled marriage in excruciating detail. She also works with the National Coalition Against Domestic Violence.

While Taylor may appear to be doing better on paper, she clearly has her own demons to sort out. Since Russell’s death there have been numerous reports of Taylor’s heavy drinking and the most recent instance of bad behavior was just a few weeks ago at Lisa Vanderpump’s Tea Party from hell. Radar Online had this inside info,

“As usual, there were epic meltdowns in Las Vegas and lots of hurt feelings. Taylor arrived at the tea party and just had an enormous chip on her shoulder and proceeded to get extremely intoxicated. Taylor was in everyone’s face, blithering on and on in utter nonsense. The tea party was an absolute disaster and did nothing to cool the ladies down.”

If Taylor is drinking so heavily, do you think she’s able to really hide it from Kennedy or has she just traded one bad environment for another? Tell us what you think in the comments below!