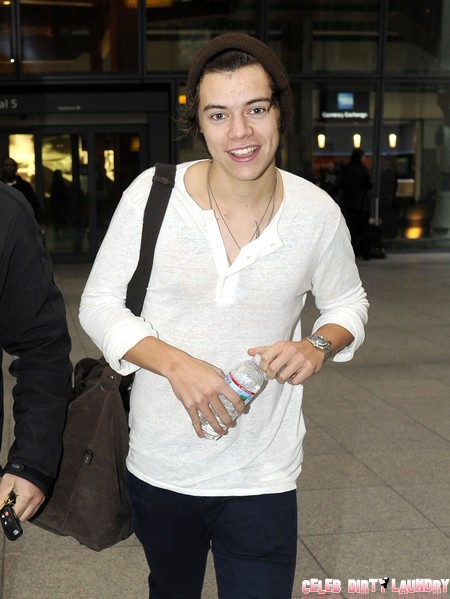 When Harry Met Sally’s sequel – When Harry Styles Met Taylor Swift – has been revamped, kick started and turned into a horror film massacre. The man-eater, on her daily manhunt, has set her sights on none other than the innocent Mick Jagger look-a-like, One Direction’s Harry Styles. The superstar boy band member invited Taylor Swift to One Direction’s ultra-important Madison Square Garden performance in New York City tomorrow, the 3rd of December, 2012. A grainy picture snapped of the two lovebirds did the rounds on Saturday and Sunday. Harry sported a white T-Shirt, while Taylor wore her infamous striped jersey – almost like a leopard’s spots.

The couple was first spotted in October at BBC Radio 1’s Teen Awards, and have been linked up by almost all media outlets ever since. This will be the billionth man for Taylor (if you haven’t been counting), and one of the first high-profile girlfriends for Harry. Many One Directioners (the rabid fans of One Direction) have already sent Taylor death threats and stinky tweets, telling her off for stealing the heart of their favourite member.

If you’ve been out-of-the-loop and out-of-touch with reality, Taylor is Hollywood’s Queen Whore. The faux-singer has been linked to almost every man imaginable, including Taylor Lautner, Conor Kennedy, and Zac Efron. Her modus operandi is to dump these men after a whirlwind romance and then to write songs about her post-breakup heartbreak. This is the one and only reason why this relatable singer is one of the biggest music stars in the entire world.

Harry’s relationship with Taylor will most definitely see the young pop star cry in his band mate’s arms when the villain, Swift, decides to decapitate the strapping young man and send his head on a merry roll down the streets of New York City.

Luckily for Harry, it will be a very, very Swift revolution – she doesn’t linger for too long in the post-breakup doldrums.

Editor’s Note: The question of whether art imitating life or life imitating art is the more apt description of the human condition has been  answered neatly by Taylor Swift (apologies to Oscar Wilde).  Her life and art are indistinguishable – designed, organized and controlled by a monomaniacal  belief in commercial triumphalism.  If our politicians had even one-half of her intelligence, discipline and will America would be laughing, rather than bleeding. Remember that you read it here first: Taylor Swift will be the first female President of the USA.