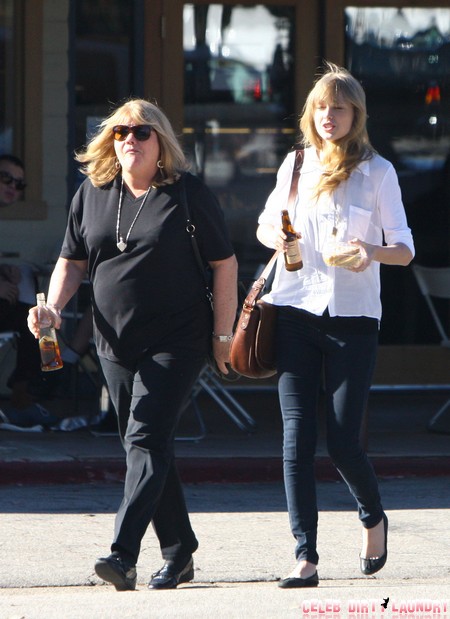 No one can deny that Taylor Swift is a bonafide megastar, selling millions and millions of copies of her albums with the aid of the stalkerish legion of young girls that are her fans… even though every song sounds the same, has repetitive and simplistic hooks, and almost always has something to do with a boy and heartbreak, Swift in this day and age is the only female artist to have two back to back albums to have sold a million and more in its first week ( Speak Now and Red).

But sources close to the star and in the industry, state that Taylor is controlled by her mother, Andrea Swift, who is the one really responsible for the singer’s meteoric rise to the top.  An insider tells British mag, Grazia:

“You do not want to cross Andrea Swift… Taylor is sweet but I always feel that she’s quite aloof. Andrea is very present though! If she isn’t happy, she’s going to say something.”

Kris Jenner is also an ever-present (or I as I would like to say, attention-seeking) momager. She’s there for the photo shoots, the business meetings and the award shows. Not only is she there for the fame and attention whoring, but she even been accused of orchestrating the lives of her kids to get the ratings for the television show and to make the Kardashian branding more successful. Kris even went so far as to produce and market Kim Kardashian’s sex tape with Ray J.

At least Andrea Swift isn’t running the Kardashian brand of celebrity of sex tapes and nipple slips… yet. No, her mother won’t allow that. According to reports, Taylor’s mother is very protective of Taylor and her image. She reportedly has instilled in her daughter the urge to always present herself with poise and grace. Which so far, has been working splendidly. Taylor hasn’t been caught falling drunk out of clubs (Lindsay Lohan, Rihanna) flashing her coochie to every paparazzo in town (Britney Spears, Paris Hilton, Lohan-again, Miley Cyrus) or having nude pics accidentally leaked to the web (hmmm…every starlet in Hollywood). No, she’s always been pretty classy and elegant for a 22-year old. Almost too much…so the iron fists of Taylor’s mom must be locked around Taylor’s career.

What do you guys think? Is Taylor’s mom whoring her out for fame and fortune like Kris Jenner does her children? But let’s be serious folks, there is no way you get a Taylor Swift without a killer stage mom.  One thing that becomes clear after looking at the photos of Mama Swift – she isn’t in charge of Taylor’s diet.