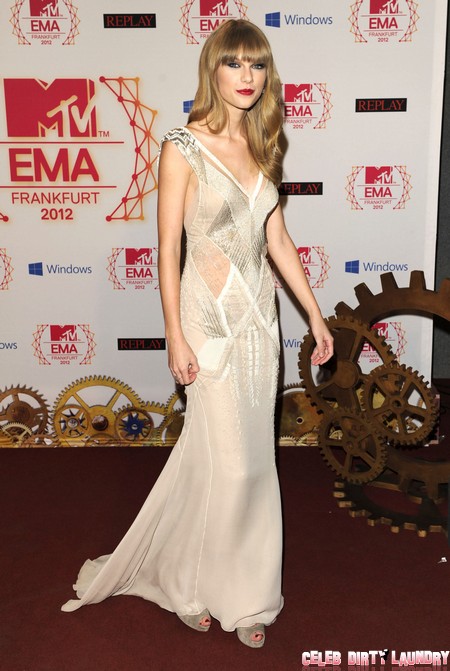 Taylor Swift and Robert Pattinson would be a devilish concoction, wouldn’t they? Linking these two names romantically, like a game of Connect 4, would be a disastrous punch in the throat of love. Swift’s lyrics will take a turn for the gothic, and Pattinson’s heart will be ripped out ala Mortal Kombat style. According to OK! magazine, this is not as farfetched as first thought.

An insider explains, “Rob’s ready to play the field… [Swift] would be a fantastic revenge fling if nothing else. She has always had a thing for Rob, and when she and Taylor Lautner broke up, she let Rob know she was available, but at that point he was hot and heavy with Kristen.”  Allegedly, ever since Stewart’s little indiscretion with Rupert Sanders, Rob finds Swift “a lot more interesting”. On the other hand, Swift has a “sore spot” for Stewart, “Kristen is terrified that Rob is going to have a revenge fling, so it will be especially painful if it’s with Taylor.”

The source adds, “Taylor is so hot, but more than that, he knows Kristen would be crushed – and he’s dying to get back at her. He loves Kristen and has forgiven her partly, but he’s still a man, and he is dying to vindicate himself. Hooking up with Taylor would be fun and cathartic!”

Okay, who opened the playpen and let the Honey Boo Boos out? Was it you again Aunt Mildred? This pointless and sordid tale of revenge is just that, pointless and sordid. We highly doubt Pattinson would be able to exact this cool, sniper revenge on Stewart. He is just not that type of guy. In fact, it should rather be the other way around. Swift has a penchant for munching on the hearts of men, so her snotty burrowing might cause her to end up smack bang in the middle of Stewart and Pattinson’s romance. Hey, what is a love triangle without Taylor Swift?

In the end, we all can attest to the fact that if this tale were to be true, Swift will be looking at a new display cabinet, because a love triangle of this magnitude will sure as hell palm in the Grammy’s when Swift pens it for a future album. Do you think it’s true? Do you think Swift and Pattinson are getting their kink on? Let us know your thoughts in the comments below.