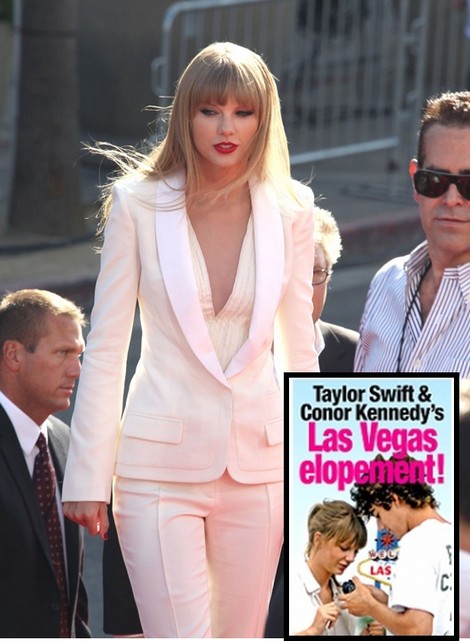 Taylor Swift’s plans include thinking she has found the perfect man in Conor Kennedy. Oh, I’m sorry, I meant to write teenager. Regardless of what others think of the age difference, 22-year-old Swift is set on eloping with 18-year-old Kennedy. Silly kids!

“Taylor made up her mind that Conor is the man she wants to marry – and she doesn’t want to wait any longer,” revealed an insider. Let’s not forget for a second that Kennedy isn’t even in college yet, he’s still high school. Can you imagine this kid going to school going to school every day talking about how awesome his girlfriend is and what she did for me and this that and another while his friends and classmates are just thinking “Wtf dude?”

I know that Kennedy has had a hard year with his mother, Mary Kennedy’s, suicide to deal with but honestly, you are a Kennedy. You come from money and your dad is Robert Kennedy Jr. You will never have to worry about anything in your life if you chose not to – other than who to marry and making sure to have a really good lawyer. While you are school and have to deal with everything, your girlfriend is planning a wedding and babies. Can you really handle all of that? And when you break-up with Swifty she’ll end up writing a song about how awful you were to her. Do you think that’s something you can add to your pile of crappy things that you have already had to deal with in your very young life? I’d get out while you still can, kid.

Do you see ‘Taylor Swift Elopes’ as a future headline? We all know how bad Swift wants to be a Kennedy and now that she has one in her culpable hands she’s anxiously awaiting flying off to Vegas for a quick elopement. Last time I checked, when I was her age, my mind changed so much I didn’t know what I wanted, even though I thought I knew everything.