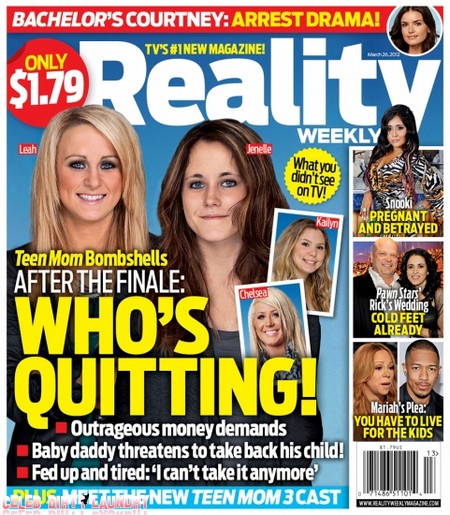 The May 28th, 2012 issue of Reality TV features the cover story ‘Teen Mom Bombshells – After the Finale: Who’s Quitting!’  This week’s magazine has the scoop on the outrageous money demands of the Teen Moms.  Rumor has it Leah Messer and Jenelle Evans are threatening to quit if they do not get more money.   A source said: “Leah wants more money and even went as far to say people from her West Viriginia hometown refer to her as the “redneck Kim Kardashian.”

According to the magazine although season 3 of “Teen Mom 2” has already been filmed, the girls are allegedly threatening to leave before season 4 begins filming.

Leah’s mother, Dawn Spears, took to her Twitter account to reveal details on the situation, calling the reports untrue. The magazine also goes on too claim that one Teen Mom’s baby daddy has threatened to take his child back and another Teen Mom is fed up and tired and cannot take it anymore.

Reality TV has the scoop: In this week’s issue: Find out which Teen Moms are planning to leave the show next season. Plus, Snooki is pregnant and betrayed, Pawn Stars’ Rick is having cold feet before his wedding, and an inside look at Nick Cannon‘s fight to stay healthy for his children!

Also included in this week’s issue the magazine has the new cast of Teen Mom 3.  They also have the details of The Bachelor’s Courtney Robertson and her arrest drama.  Courtney was chosen this week as the winner of The Bachelor Ben Flajnik.

To find out all these details and more, pick up the current issue of Reality TV.