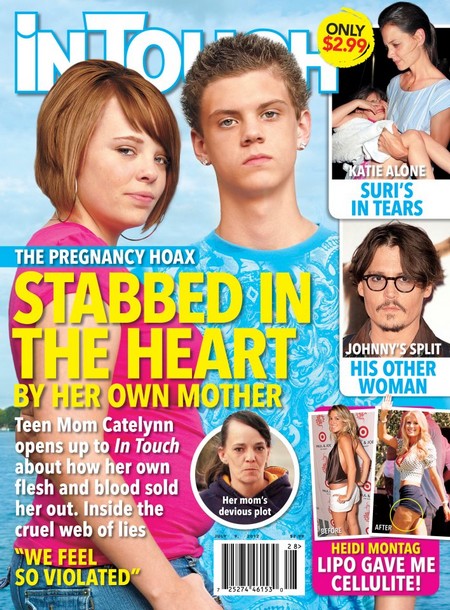 The current issue of InTouch Weekly features the cover story ‘The Pregnancy Hoax – Stabbed In The Heart By Her Own Mother.’ Yikes the magazine has the explosive story that Teen Mom Catelynn Lowell was betrayed by her own mother.

Catelynn was upset when the magazine featured a story a couple of weeks ago claiming Catelynn and her fiancé, Tyler Baltierra were expecting a child.   At the time Catelynn said it “wouldn’t be fair” to her daughter Carly, whom she gave up for adoption, to have another so fast.

Catelynn’s mother, April  was the one who told the magazine Catelynn was pregnant, but according to Catelynn it was all made up and it was a lie.

InTouch has the scoop on the story, “At 20 years old, Catelynn Lowell has weathered more than many adults do in a lifetime: a tough childhood with a troubled family, an unplanned pregnancy at 16 and a painful decision to give her baby girl up for adoption. But the breakout star of the MTV reality shows 16 and Pregnant and Teen Mom — beloved by fans for her sunny outlook even in the face of overwhelming odds — is reeling after learning the stranger-than-fiction truth behind a recent In Touch story reporting that she and her fiancé, Tyler Baltierra, were happily expecting a child.”

Poor Catelynn her mother went so far as to have a friend collaborate the story and even got documentation from a local doctor.  The story gets even more bizarre, a person claiming to be Catelynn called the magazine and confirmed she was pregnant.  However, after analysis it was discovered the person on the phone was not Catelynn but her mother.

Catelynn has apologized and says the whole thing was a con by her mother who still insists Catelynn is pregnant.  What a strange story, why would her mother claim she was pregnant.  Catelynn says she is not mad at her mother, while, her fiancé, Tyler Baltierra says he feels violated.  What do you think did Catelynn’s Mom April just do this for attention?  Hit the comments and let us know what you think!