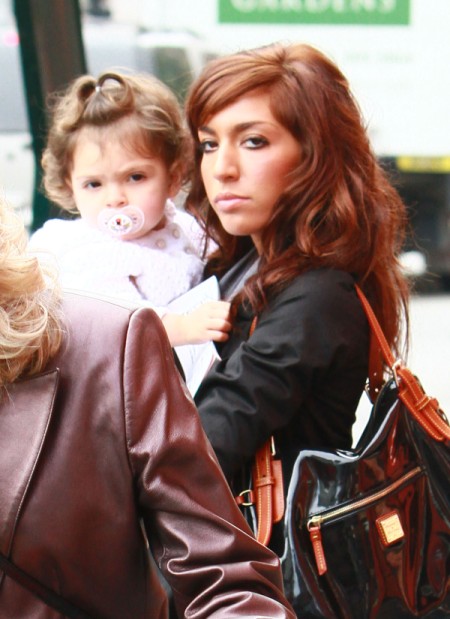 Teen Mom star Farrah Abraham has been frank about her battle with drug abuse in the past while insisting those dark days were behind her but the 21-year-old is now getting called out by a friend who claims that Farrah is abusing Adderall, Xanax and alcohol to help her cope with her life.

Austin Mathouser told Radar Online that on a recent visit to LA, Farrah filled him on her current prescription pills cocktail of choice and, being the great pal he is, she decided to tell everyone.

“When she was in Hollywood to celebrate her 21st birthday we partied at Geisha House and Kiss Lounge in Beso,” Austin said. “All throughout dinner and the club she talked about how she does Xanax and Adderall to stay up and energized. She frequented the bathroom that whole night taking them to stay up.”

Austin also told RadarOnline.com that coupled with all the alcohol she was drinking, Farrah became a drugged, drunk mess on that June 2 night.

“She got very drunk. She was grabbing on guys and girls, and even hit one guy that didn’t want to dance with her,” Austin said. “She got really sloppy and was throwing her drinks around and yelling.”

According to Austin, Farrah told her that not only does she use these prescription drugs to stay awake when she’s out partying, but she uses them to deal with her busy schedule. “Farrah said she does Adderall before every event that she attends,” Austin said. “It’s sad because she has a little one. Sophia should be her ‘high,’ her enjoyment and happiness. I’ve personally lived with drug addicts and it’s not fair to the child at all.”

Somewhere Amber Portwood is super stoked we’re not talking about her yet. Oh, too late! But seriously, this sounds similar to Amber’s story. These teen moms rocket to fame with their hit show and come into money and fame and, naturally, have no idea how to deal with it so they dabble in drugs. There’s nothing surprising here other than the fact that Farrah has friends. I don’t know how that’s possible. I watch Teen Mom because I love me some Maci and Amber but Farrah makes my stomach curdle. I cannot handle her attitude or her voice.

You have to wonder about this story though. If Austin was such a “pal” and truly worried about her, she could have told her parents, had an intervention or anything other than telling the media. As much as I’m not Farrah’s biggest fan, I think that’s kind of a sh-tty way to go. The Xanax and the Adderall could be necessary but the fact she drinks with them isn’t the best decision. Hopefully she’ll wise up because she does have one of the most beautiful little babies of all time!

Do you believe Farrah could be abusing drugs or do you think her “pal” is just trying to make a name for herself (and maybe some money) by throwing her under the bus?