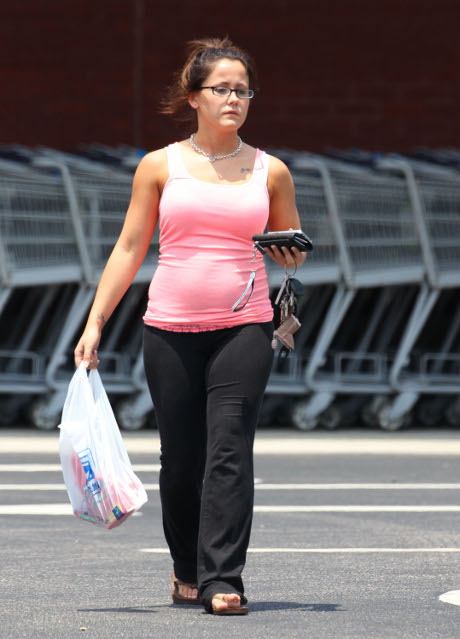 Teen Mom’s Jenelle Evans really needs to learn how to handle her money better. Or maybe she should consider hiring an accountant already! Those MTV paychecks can’t be too shabby, yet the young (sometimes) mom still finds herself homeless and currently crashing at her mother’s place in her old childhood bedroom! A good friend of Jenelle’s talked to OK magazine (because that’s what good friends’ do — they run to the media) about the D-lister’s spending habits, “Jenelle has blown through $16,000 in the last two months and she is completely broke,” says James Duffy.

Well, what on earth do you spend 16 grand on and still have nothing left to show for it?  Perhaps lots of partying and blowing it on ALL of her closest acquaintances?

She may be sleeping at mom’s place but, as usual, Jenelle paints a happy picture of her usually hellish life by telling all of her Twitter followers,“Courtland and I are looking for a house still! Applying everywhere! Can’t wait to find the perfect house. :) haven’t decided what town I want to live in yet ! Going to get Jace later.”

Courtland Rogers is Jenelle’s new boyfriend with a lengthy criminal record.  I wonder if she purposely looks for lousy boyfriends or if scumbags are the only ones she can attract. Either way, Jenelle is about to repeat her typical pattern of playing house with every guy she dates until it ends in a public smack down. If the cops aren’t involved then photos will be leaked. She never learns her lesson and the end result is always the same.

Given her bad choice in men, I kinda hope that Jenelle is broke and has to stay with her mother. At least she’s somewhat safe there AND she gets to spend real time with her son Jace!

Do you think Jenelle has any money left to even get an apartment with Courtland or has she burned through it all faster than you or I could count to ten? Tell us in the comments below!