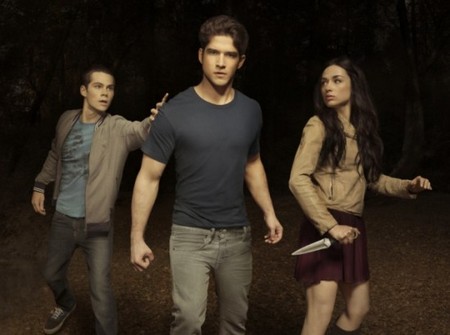 Tonight on MTV is an all new episode of Teen Wolf. On tonight’s show Derek becomes convinced that Lydia is the shape-shifter. If you missed last week’s show called “Abomination”, we have a full and detailed recap here for you.

On last week’s episode the shape-shifter continued his murders while Scott tried to get Allison to retrieve a rare book in Gerard’s collection. Derek and Stiles went swimming and it looked like Stiles was in danger.

On tonight’s episode, the guys discuss the identify of the Kanima, and Lydia has another encounter with Peter Hale.  Derek becomes convinced that Lydia is the shape-shifter and Scott needs to protect Lydia!

Tonight we hope to find out who the Kanima is (my bets are on Lydia), what Jackson might possibly be (is he the Kanima?), and what Allison’s grandfather intends to do with Scott.

Tonight’s episode is going to be an exciting one that you won’t want to miss, so be sure to tune in for our live coverage of MTV’s Teen Wolf tonight at 10 PM EST!  While you wait for our recap hit the comments and let us know what you think of Teen Wolf season 2 so far?  Check out the sneak peek video of tonight’s show below!

The show starts in the Lacrosse locker room. Jackson is lifting weights like a maniac, trying somehow to access the power he experienced before when he lifted up the truck. After a bit of focusing he tries to do it again. Erica sneaks up on him and takes him to Derek, who asks him what happened to him on the full moon.

Derek gives Jackson a taste of the Kanima’s (reptile-monster’s) venom. The venom paralyzes him, which means that Jackson isn’t the shapeshifter creature that has killed so many people — or is he?

Jackson’s friend says that he can restore the video that was lost on his video.

While in class, Jackson asks Stiles and Scott what the monster is. Jackson has an increased sense of hearing and he overhears Isaac and Erica scheming to do something in chemistry class. Stiles is certain that the mysterious reptile creature is not Lydia, but the others are not too sure. While in class, Lydia has a vision. She’s at the chalkboard and after finishing, she’s scribbled a set of words on the board. They are spelled backwards. Stiles takes a picture of the board and, upon reversing the image in his phone, discovers that the words read “SOMEONE HELP ME.”

Lydia is clearly confused and conflicted, but I’m going to be surprised if she’s actually the shapeshifter . . . for some reason that feels too obvious. However, everyone and their brother thinks that she might be this creature.

Scott and Stiles realize that Erica and Isaac plan to administer a similar test to Lydia. They’re all in chemistry class. Stiles and Scott sit beside Lydia — to protect her from Isaac and Stiles.

In a group project, the class rotates around during a chemistry experiment, switching off partners. Isaac eventually winds up sitting next to Lydia. The chemistry project produces a crystal. Isaac put a glob of venom on the edible crystal. Lydia eats the crystal and . . . . The venom doesn’t do anything to her. Is she the Kanima? Right now, it looks as if she is. Both Stiles and Scott are shocked. But I am, even after that, still not convinced.

Stiles, Scott, and Allison chat about Lydia’s current predicament. Derek thinks she is the Kanima. They try and figure out a way to protect her. They think they might be able to find something in the bestiary, but Stiles reminds them that they can’t read the language it’s written in. Allison says that she might be able to find someone that can read it. Allison agrees to do that, and Scott agrees to talk to Derek. They share a tender moment together.

Meanwhile, Lydia is in the counselor’s office.

Scott is looking for Derek and stumbles into Boyd. Scott tells Derek that he won’t let Lydia be killed, but Derek has already sent Isaac and Erica after Lydia.

Scott confronts Derek about Jackson and tells Derek that he thinks Lydia is immune to the bite and, somehow, passed immunity on to Jackson.

The Lacrosse coach finds Scott and shows him a torn pair of Lacross pads — ones that look like they’ve been torn with intense claws. They belong to Danny.

Jackson and Lydia talk privately. Jackson asks Lydia for the key to his house back. Jackson knows that she just lied to him. Scott confronts Danny, who continues to work on Jackson’s video. Scott asks Danny how his pads were ruined. He says he doesn’t know, that he wasn’t the one who wore them last.

Scott gets a call from Allison, who tells him that he needs to get over the house (where Stiles, Jackson, and Lydia are as well) immediately.We see the computer screen, the one that Danny is working on, before Scott leaves to go to Allison. Jackson is seen waking up with glowing yellow eyes? Is he the Kanima?

Meanwhile, before the commercial break, we see Derek, Isaac, and Erica standing in front of the house where Lydia, Jackson, Stiles, and Allison are currently hiding out in.

Stiles looks out the window to see Derek and his pack stalking them. Allison, looking outside, thinks she might have to call her father. She doesn’t want to, but she doesn’t want them to kill Lydia.

Jackson asks Lydia for his key back. Jackson says that Lydia broke into his room, where she saw what was happening to him and edited the tape. Lydia says that she doesn’t know what he’s talking about and that if he really needs his key back so badly to just take it. “I hate you,” she says to Jackson. “I hate you so much.”

“Do you don’t,” he says. They kiss and, as they kiss, we see the back of Jackson’s neck transforming and shifting and changing . . . he’s growing scales! Kanima = Jackson!

Isaac breaks into the house.

Meanwhile, Jackson and Lydia are kissing. She hears something and leaves the room. Allison tells her to go back inside. Jackson is changing, changing into the Kanima. He’s gone, however, when she returns.

Allison confronts Erica, who’s taunting Allison. Allison, being the badass that she is, coats one of her crossbow arrows with the venom from the Kanima. Scott throws all the wolves out of the house and, after they all convene on the front lawn, they all realize that the Kanima isn’t Lydia . . . but Jackson.

Jackson gets away and, in his escape, finds himself standing at the side of a car. He puts his hand on the driver’s side of the window. The driver, whose face we don’t see, puts his or her hand up. They share a tender moment . . . before Jackson darts into the woods. Has Jackson/The Kanima found himself a friend? Or is there another Kanima on the loose? For some reason I think the person in the car is the counselor, the one that was desperately trying to help Lydia out.

Let us know what you thought of tonight’s episode! I thought it was very good, and I was very surprised to see the kiss between Jackson and Lydia, as well as the touching moment Jackson/The Kanima shared with that mysterious driver at the end of the episode. I will be interested to see what becomes of that — who was in the car? Any predictions? Another thing to consider is this: what kind of power does Lydia possess? She’s not the Kanima yet the Kanima venom does not affect her. Does she have a supernatural immunity that will become sought after and desired in future episodes — a treasure that the werewolf hunters will find appealing? I can’t wait to find out!

Tune in next week for an all new episode of Teen Wolf!