Teresa Giudice Guilty! – She DID Set Up Melissa Gorga For Strippergate 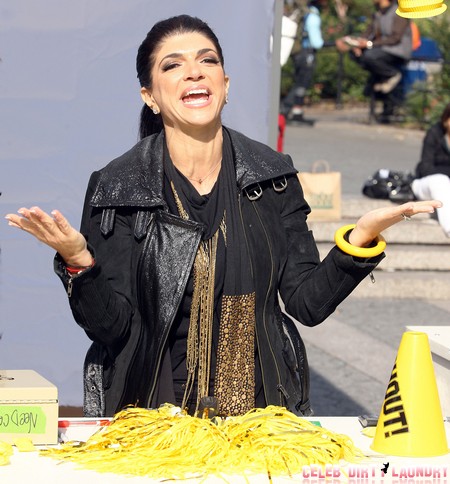 Did you catch The Real Housewives of New Jersey last night?  If you did then you watched an hour long fight of epic proportions between the entire cast play out before the cameras. It has been alleged, assumed and quite frankly if you have seen even one minute of this show then you already knew that Teresa Giudice guilty was the inevitable verdict since she DID set up her sister-in-law, Melissa Gorga. She has spent years hating Melissa, blaming her for taking her brother away when in fact it’s actually Teresa constantly insulting his wife that has made Joe Gorga keep his distance.

Recently Teresa went to a random salon with her friend, Kim D and encountered a man named Angelo Vrohidis who claimed he was once Melissa’s boss when she worked the pole at a gentlemen’s club. Ironically, Angelo showed up at Kim D’s fashion show and opted to talk to Melissa in front of all the housewives. It was alleged from the get go that Teresa wanted this chat to happen. She wanted Melissa to feel uncomfortable and in that moment Tre looked pretty unhappy that Melissa handled it all so well. She claimed to not remember where she knew him from. I mean, her eyes looked mortified, but she really played it cool. As all of this went down Jacqueline Laurito was receiving texts from a friend who had overheard Angelo say that Teresa and Kim D wanted him to embarrass Melissa. It all got ugly and after last night’s episode it was revealed that the entire cast has severed their ties with Teresa and her family.

Now Angelo has come forward to say that Teresa Giudice DID set Melissa up! He has confirmed what we already knew. RadarOnline has more saying,

“Angelo Vrohidis bragged that Teresa knew about Melissa’s stripper past and that he appeared on the hit Bravo show because “Kim and Teresa want to blow the whistle on her.  They had me do this thing, ya know…’Melissa! Wow, I almost didn’t recognize you. You look fabulous!'” he said. During the encounter at the fashion show Melissa claimed she couldn’t remember where she knew Angelo from, so Teresa cornered her in the bathroom wanting to know the truth — even though Angelo claims she was in on it.”

Are you surprised to learn that even Angelo now says Tre had a hand in this? I’m not. She is as shady as they come and there was no reason to believe (as she wanted us to) that she wanted a good relationship with Melissa. The moment an opportunity arose to cause drama she grabbed it.

Next week is the reunion show. How ugly do you think that will get now that the battle lines are clearly drawn, it’s the cast vs. Teresa! Will you be tuning in for our live recap here at Celeb Dirty Laundry?