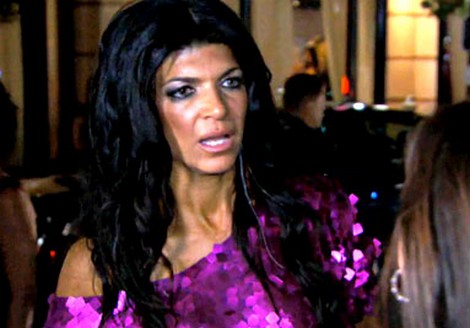 Tonight on Bravo is the season finale of the Real Housewives of New Jersey called “Strip Down Memory Lane.” On tonight’s the season-long tension finally comes to a head in this week’s season finale, as Melissa and Teresa face-off for one final time. Teresa confronts Melissa for having a past as a stripper, and the fate of their family ever mending their issues is put to the final test. If you missed last week’s show called “A Bald Canary Sings.” there is a full and detailed recap HERE for you!

Last time we saw our favorite housewives, Kathy attempted to make a sweet business deal while Melissa met with a music industry hot-shot to see if she had the makings of a rock star. Fashion fever gripped Jersey as it was time for Kim D’s annual Posche Fashion Show. Before the models, a ghost from Melissa’s past came down the runway and Teresa made a shocking discovery that set the stage for the drama to come.

On tonight’s show Melissa prepares to confront her past as questions about Teresa’s involvement in the stripper-gate arise among the ladies. A distressing phone call from Melissa sends Joe Gorga and Rich Wakile to her rescue and tensions hit a boiling point when they are greeted by the high priestess of Posche, Kim D.

Teresa and Jacqueline’s friendship is put to the final test and in a shocking moment of truth Joe Gorga decides on the fate of his relationship with his sister.

Tonight’s episode is going to be filled with the usual Housewife drama and you won’t want to miss it, so be sure to tune in for our live coverage of the show tonight at 10 PM EST! While you wait for our recap hit the comments and let us know what you think of “The Real Housewives of New Jersey” season 4 so far! Also we have a sneak peek video of tonight’s episode “Strip Down Memory Lane” below!

Tonight’s recap: “When you associate with scum, you become scum.” That has been the tagline for the season finale of The Real Housewives of New Jersey that is starting right now. Last week was just a teaser for the whole strippergate thing. Tonight right off the bat we get many more details than we had last week. Angelo approached Melissa to say hi and try to jog her memory. He told Teresa earlier in the day that Melissa used to dance for him at a strip club. Now we see that after that introduction Teresa looks truly pissed off because Melissa handled herself so well. If there was any doubt about this being a set up it’s gone now. Teresa absolutely knew and arranged for Angelo to reconnect with Melissa.

As Melissa heads for the ladies room, Teresa follows her and things begin to get tense. Teresa tells her Angelo is claiming that she worked for him and Melissa says he managed her for like, a week, as she bartended. Teresa keeps pushing it, insinuating that she doesn’t know what Melissa did at night way back when and finally Melissa starts to slowly snap. She decides to call her husband (Teresa’s brother) to come and settle things as Teresa pleads with her not to. I’m guessing Tre doesn’t want Joe knowing what she has stirred up here.

Meanwhile back at the table Jacqueline gets a text from a friend telling her that Teresa set up a situation and that fur is about to fly! Lauren, Caroline’s daughter is also eavesdropping on Angelo who is sharing Melissa’s stripper past with anyone who will listen.

Teresa decides that she’s going to confront Angelo before her brother can have an opportunity. Jacqueline’s phone keeps blowing up with texts explaining that Teresa is setting Melissa up. Teresa goes looking for Angelo and finds out that he left. Of course he did! Tre is good for making sure a bomb is dropped and then just watching the fallout.  Jacqueline, Caroline and Lauren are all texting each other under the table and as Caroline puts it, “When Teresa hits she historically, always has an audience.” Kim D. is the chick having the fashion show and Melissa is sure that she is also involved. Melissa tells her to “Shut up and talk a walk.” when she attempts to apologize for Angelo’s comments.

Jacqueline is convinced that because things don’t add up it smells really bad. She knows Tre better than most and Tre doesn’t go to random salons either. She figures Kim D. invited teresa in order to talk to Angelo. Melissa takes Kathy outside and fills her in and Kathy just doesn’t care what Melissa was before she joined the family. She believes only a devil would mess with their happy marriage. A devil, or a jealous sister-in-law with a douchebag husband, four out of control girls and money trouble galore!

Jacqueline comes forward and tells Melissa and Joe (who showed up with Kathy’s husband, Richie) that she knows for sure that Teresa set it all up. Joe storms inside looking for his sister and when Melissa finds Tre she corners her. Of course Tre is flipping out. Have you noticed when Teresa is caught in a lie her voice goes up a couple octaves? She’s inside partying with Kim D and the rest of the cast is outside absolutely losing it. Caroline is sick to her stomach and docile Jacqueline looks like she’s about to rip down the building with her fake nails. Kim D does stroll out and I have to wonder how this chick pulled together a fashion show and has any credibility at all. She looks like an ugly man. I can’t even call her a drag queen because she’s just not worthy of that comparison. She looks like something that crawled out of the river and dried while walking 5 miles to her “show”. Bleech.

Joe decides to take his wife home and refers to Teresa, his sister as a “dirty, assed bitch.”  Jacqueline says her friend told her Teresa knew this situation was going to go down for weeks. Lauren is worried that Jacqueline will snap because when she gets proof that’s when she loses it and she’s standing to the side looking pretty shaky.

Caroline says Teresa was telling her a year ago that Melissa was a gold digging stripper before hooking her claws into Joe.  Joe doesn’t understand how his sister could try to hurt his family so deeply and to him, it’s closure. He’s done with the Giudice’s. Jacqueline promises to forward the texts to Joe and as she turns around Teresa confronts her. Jacqueline has her a-ha moment when Teresa tries to say Jacqueline is actually setting her up and causing problems for her family.

Jacqueline has had it. She calls her scum as Caroline watches and then quickly gets her out of there. She’s afraid Jacqueline is suffering big-time, realizing her once best friend that she trusted is complete trash.

Caroline, Jacqueline and Melissa have not spoken to Teresa since the fashion show. In fact Melissa and Joe put their home on the market in order to get further away from her. Tune in next week for the fiery reunion!