Teresa Giudice Is Scum: Jacqueline Laurito Finally Gets It! 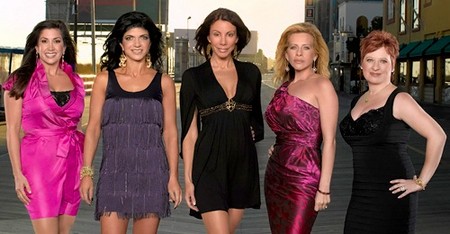 I think it takes an awful lot to get The Real Housewive’s of New Jersey’s Jacqueline Laurito to hate your guts. I mean, she is always the most insecure girl to any party with her body issues and fear of hurting anyone’s feelings ever. She also has an incessant need to avoid conflict and have everyone like here which makes it absolutely ironic that she’s the one ultimately bringing down Teresa Giudice. The former besties have been at odds for months now as Teresa has slammed Jacqueline for caring about her and questioning the validity of things Teresa plants in the tabloids.

Last week viewers saw the beginning of Strippergate, where Teresa just so happened to run into a man named Angelo who claimed to know her sister-in-law, Melissa Gorga. Angelo claims that Melissa got down and dirty for him at the gentleman’s club that he managed years ago. Later that evening at a New Jersey fashion show who shows up but Angelo! And he approaches an unsuspecting Melissa and tries to push her buttons and embarrass her in front of the rest of the ladies. Melissa plays it cool but I think everyone smelled a rat almost instantly. Until very recently Teresa claimed to hate Melissa so this opportunity to set her up was too perfect. Obviously, she invited Angelo. Maybe not on camera, maybe by text or something but I’m betting it happened.

On Sunday’s episode, little ole Jacqueline will be holding the smoking gun. She has proof that it was a set telling Teresa,

“I had a friend texting me the whole conversation that that guy said that he was going to embarrass her, and he was purposely setting her up,”

Teresa tries to say that Jacqueline might have arranged the set up and that’s where she just completely loses it,

“Why the f**k would I set up your sister-in-law, who I happen to like? Who has the motives here? You. You don’t like your sister-in-law. Now I know we’re not friends because how dare you try to turn that around on me.  How dare you? You’re disgusting. You’re scum. I am completely done.”

Gotta love how Teresa always, consistently blames everyone but herself for everything. It couldn’t be any more obvious that she set up this meeting, proving that the attempt to be friends with Melissa has been as fake as Teresa’s tan. I have a feeling that Jacqueline doesn’t mess around and when she says it’s done, it just is. There’s no reviving this friendship and if you don’t have Jacqueline then you don’t have any of these ladies in your pocket!  Are you glad to see Jacqueline finally see the light? Tell us in the comments below!