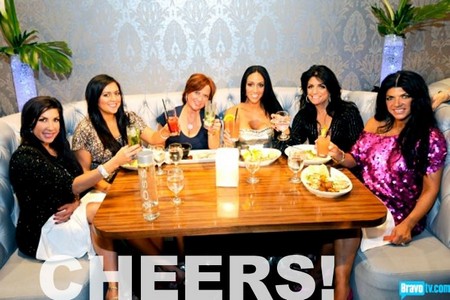 After watching the first part of The Real Housewives of New Jersey’s season four reunion show I finally get it, I finally understand why Teresa Giudice stays with her husband, Joe Giudice. I mean he is a lying, cheating criminal that has not a single moral fiber in his body and guess what- after tonight’s show he may be her better half! In one measly hour television hour viewers’ watched no doubt with their mouths open as this crazy bitch disrespected everyone that she encountered making it very easy to see what her cast mates have long known, she’s pretty much the devil in a Christmas pageant dress and that my friends, makes her far worse than her husband.

Let’s break it down piece by piece starting with Kathy Wakile, her long suffering cousin. Kathy admits she had her nose and lips “done” and Tre makes fun of her. Kathy has a cannoli kit in the works and Tre says she stole the recipe from her mother. Tre then insults Kathy’s deceased father before calling her a “disgusting piece of sh*t”. No love lost there and if you back track through the mess, it’s hard to pin point a reason for Teresa’s anger. I’m thinking jealousy maybe because Kathy has a rock solid marriage with two happy kids.

Then there’s Caroline Manzo who wrote Teresa off long before the other ladies. Caroline basically acts as Jacqueline Laurita’s bodyguard and it seems to be her non stop mission to shut Teresa up. Teresa refers to Caroline as a “hag” and “blubber, blubber and blubber”.

Lauren Manzo recently had lap band surgery to help her drop 35 pounds after losing 50 on her own. Teresa insult’s Lauren for having the surgery and Lauren accuses her of not writing a single word either in her blog or in her cookbooks. She then sets out to prove what a dingbat Tre is by asking her to either spell or define “Napalm”. Tre looks like a deer in headlights as she struggles to find the answer on the ceiling of The Borgada in Atlantic City. No such luck but I could have told you that. When a supposed chef uses the word “ingredient-ces”, napalm is not going to be in her vocabulary.

Melissa Gorga has had problems with Teresa for years. She has called her a stripper, a hooker, the devil- just name it. I guess she had to try a different angle because tonight the accusation was simply that Melissa keeps her name in her mouth for publicity. Funny thing is the only one ever mentioning publicity is this crazy winner.

Jacqueline had the worst war of words with Tre and it has been a long time in coming. Tre tried unsuccessfully to accuse Jacqueline of ruining her family and setting her up. Jacqueline says that Tre makes up her whole life so that she can sell it and make money off of it. She’s even gone so far as to have her 11 year old daughter Gia talk to the press.

Probably the moment where I think we all really saw Teresa for who and what she really is, was the scene about Jacqueline and her son who is autistic. The tree year old has regressed and can no longer speak, something that has crushed Jacqueline. Even during this moment, when Jacqueline spoke out about autism awareness, Teresa tried to turn Jacqueline’s pain into something about her. You know, Teresa loves little Nicholas and was there when he was born and…that’s about the point when there was a collective shut the F up from all the ladies.

There is just nothing good left to say about Teresa. She has made herself completely irredeemable and a scumbag that is perfectly suited for good ole’ Juicy Joe!

Do you think she’s going to be absolutely hated after her mortal combat session with her former friends? Tell us below!