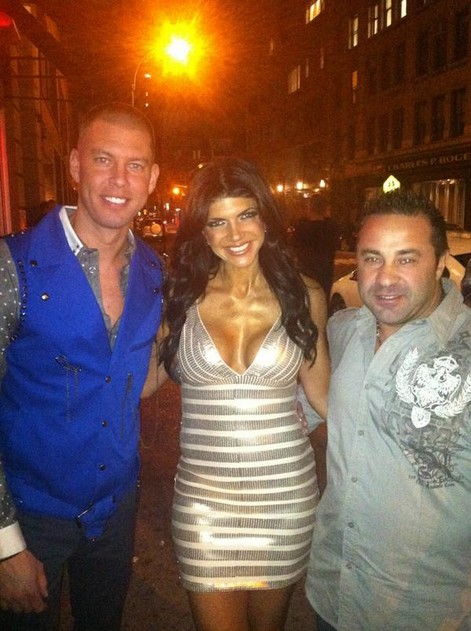 Business has been slow for Joe and Teresa Giudice lately and by business I mean, their compulsive need to create drama and grab tabloid headlines! So, they’ve been pretty quiet since the last Real Housewive’s of New Jersey reunion show wrapped up. I’m guessing they probably spent a month existing in opposite wings of their Jersey mansion, not speaking until they both got bored.

About a week ago Teresa talked to the press seemingly out of nowhere, about how her husband is NOT homophobic in the least bit. She claimed he was being called that and ripped apart for insulting the gays in general. I’m not sure who accused him or where it had been printed and I just kind of assumed this was typical Teresa throwing out something controversial that she made up on her own to grab attention.

Now I’m pretty sure that’s exactly what happened because hot on the heels of us all being reassured that Joe isn’t homophobic, we now get video proof of his night out at a gay club with Teresa.  The attention seeking couple partied at NYC’s Splash Club and Joe seemed to thoroughly enjoy himself. But you knew he would, right? I mean that’s what Teresa coached him to do. Have fun and make a spectacle of yourself. Joe had no problem calling all guys with the chiseled cheek bones and wash board abs to come up and join him on stage to dance.

Yep, Teresa got exactly what she wanted! A three part story to sell to the magazines. First Joe wasn’t homophobic, now he’s partying with men and next she’ll be voluntarily denying that Joe is gay!  You know that I’m right, admit it!

My question is this, why the hell does Teresa think that anyone cares what her douche bag husband does? Tell us your thoughts in the comments below.