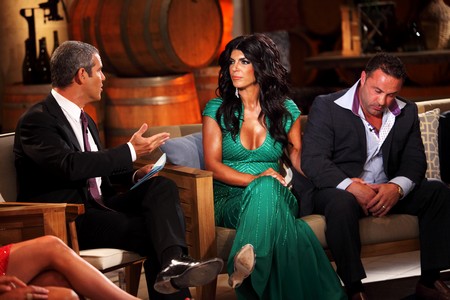 Teresa Giudice may have achieved a very special level of fame that will help her extend her already overextended 15 minutes of fame. I think this week she is officially the most hated reality star of the year – even husband Joe Giudice hates her – and let’s not forget Caroline Manzo, Danielle Staub and all the rest of the Jersey housewives!  Bravo really hit the drama jackpot when they cast this piece of work to join the show and Real Housewive’s of New Jersey Reunion Part 2 threatens to break viewership records.

She has spent season 4 of the hit show pitting people against each other, continuously playing the victim, turning everyone else’s’ situations into something about her and proving that she is not only ruthless, but heartless as well. Not only is she the devil, but now we learn that she is a bad friend as well. I mean obviously she is after the fact, but according to Jacqueline Laurita, even when the two were close, Tre didn’t care much about her issues. During filming Jacqueline found out that her three year old son was autistic and he has gone through a period of regression that caused him to stop speaking. When this was divulged at the reunion Jacqueline broke down and her hurt made the rest of the ladies cry with her- except for Teresa who was vilified on the spot for not caring. According to RadarOnline this is how Tre was even when the two were still speaking,

“Teresa was like that all year. My son had been regressing while we were filming and I was doing a lot of crying.  If I went to talk about my son she would quickly change the subject and start bashing her family. Despite what she’s claiming on TV she wasn’t there when I needed her the most.”

Of course Teresa wasn’t capable of being a good friend!  Her only focus is her fame and how people perceive her. If you’re not talking to Teresa about Teresa, she’s going to change the subject! Poor Jacqueline was just too naive to realize it at the time. She needed that huge A-Ha moment to happen before she’d really see what a dingbat she was aligning herself with!

Do you think we’re at the bottom of the Teresa Giudice sludge pit yet or is there more slime coming our way? Are you excited about watching Real Housewives of New Jersey Reunion Part 2?  Do you think Bravo will fire her ass once and for all or will she be getting her own spin off show? Tell us your thoughts in the comments below!