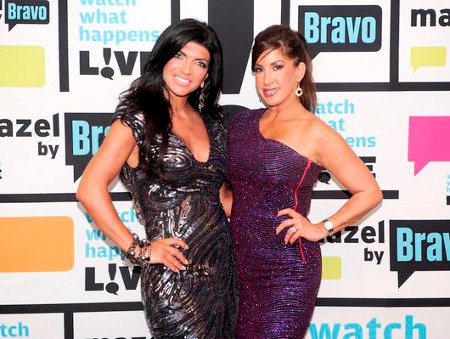 Real Housewives of New Jersey fans know that this season Teresa Giudice has lost the few friends she had left, including former BFF, Jacqueline Laurita. Jacqueline confronted Teresa a few months ago and asked her about the million rumors that were surfacing in the press and Teresa flipped on her. Her reaction caused Jacqueline to dig deeper and suggest that maybe Teresa is planting stories in the tabloids to get paid. She was genuinely worried for her friend but then angered by Teresa’s disrespectfulness and things just haven’t been the same since. Jacqueline has opted to cut Teresa out of her life and even skipped the recent reunion show in order to avoid seeing her former friend.

Kim Granatell used to be on the show and according to Radar Online, Jacqueline showed up at her house the night of the reunion a mess:

“Jacqueline seemed so traumatized that night, so we sat on my couch, had a few shots of Cafe Patron and chatted ‘til 3 a.m., Jacqueline telling me that she hated Teresa Giudice, and that I had been right about her all along,” Kim G. told Fox News’ Tom Murro.

“She was crying and completely broken over the mess the show had become and I was comforting her.  Jacqueline said she didn’t trust anyone and she was very disappointed in Teresa.”

This whole scenario sounds pretty believable to me.  Jacqueline has been very upset on camera over the loss of her friend and it’s very likely that the thought of a reunion confrontation was just too much to handle. Do you think Jacqueline will return to the show next season or will Teresa’s presence keep her away?  Tell us your thoughts about this ongoing war in the comments below!