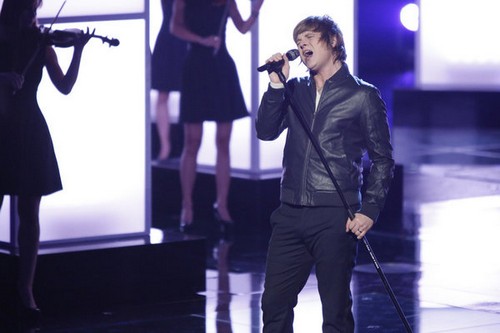 Terry McDermott took the stage tonight on THE VOICE’s FINALE for his Bring Back performance.  Terry sang “Rock and Roll All Night by Kiss.  Terry brought back some previous contestants to join him in the song, Amanda, MAckayla, Rudy and Bryan.  On tonight’s show after weeks of grueling blind auditions, the battle rounds, the knock out rounds and the live shows the winner of THE VOICE season 3 will be crowned.   Did you miss tonight’s episode?  If you did we watched it and we recapped it here for you.

Carson announces Terry who says he’s doing Kiss’ Rock and Roll All Night for his “bring back” performance and bringing back Rudy Parris, Amanda Brown, Bryan Keith and Michaela Paige. Terry talks about how much Rudy loves Kiss, how much power Amanda has for rock. He says Bryan is unique and soulful and Michaela has a ton of talent for her age. He says the song is going to be fun, high energy.

Rudy’s ripping on the guitar as Michaela opens the number. Man Rudy is like the reincarnation of Meatloaf, isn’t he? They rocked it hard!