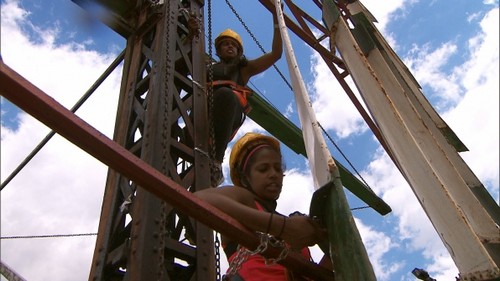 Emmy award winning, THE AMAZING RACE returns to CBS tonight with a whole new episode called, “Not A Well-Rounded Athlete.” On tonight’s show The final four Teams arrive in Spain and travel to Rafael Nadal’s practice courts for a volleying Roadblock. Did you watch last week’s episode of the season last week? We did and we recapped it HERE for you.

On last week’s show the teams encountered one of the show’s most infamous challenges in this season’s “Switchback.” As the Teams arrived in Amsterdam, they came face-to-face with a game-changing Double U-Turn. At the end of the race Abbie & Ryan were the last team to arrive and were eliminated from the race and didn’t feel right about it, they thought it is wrong for the Jaymes & James to back stab them.

On tonight’s show in Detour B, Dating Couple Lexi and Trey must run an obstacle course through the capes of eight Matadors while dressed as a bull in order to receive the next clue.    The final four Teams arrive in Spain and travel to Rafael Nadal’s practice courts for a volleying Roadblock. Also, one Team draws blood after getting bullish with a Detour.

Tonight’s episode 10 is going to be another fun one, which you won’t want to miss. So be sure to tune in for our live coverage of of the season 21 episode 10 of The Amazing Race — tonight at 8:00 PM EST! While you wait for our recap, hit the comments and let us know how excited you are about the new season of the Amazing Race?

Tonight’s show: Natalie & Nadiya were the first team to arrive at the Pit Stop and therefore are first to depart the outskirts of Amsterdam for the start of the tenth leg. Teams must now fly to Barcelona, Spain and when they land they will head to the sea side Port of Barcelona. Once there, a ferry will take the to the island of Mallorca where they will find devils and demons playing with fire; one demon will have their next clue.

The first three teams are making their way to Barcelona, Spain, they are Natalie & Nadiya are one of those teams being in the lead. Meanwhile, Josh & Brent are the last team to depart, but are still somewhat hopeful.

Jaymes & James, Trey & Lexi were also on the first flight and have a little time to spend at the beach since the ferry doesn’t open till 10:00am. The teams bump into Josh & Brent at the ferry and are thrilled that the U-turn strategy worked and they are still in the race.

The next clue has the reams heading to Cento de Alto where they are going to have to play tennis, actually they have to return 20 balls in play. The machine is firing up the balls and they are really fast, Trey is doing well but James is struggling.  After hitting the 20 balls, teams must drive themselves to the Coves of Campent, Trey & Lexi are the first team to be on their way.

Natlie & Nadiya are not at the tennis court yet, standard vehicle seems to be a problem for them. Meanwhile, James & James arefinish hitting their balls. Being that tennis is a physical challenge, you would think that Josh & Brent would have Brent complete the challenge since Josh hurt his ankle, but no, they have Josh do it, dumb. Natalie & Nadiya have arrive at the tennis court, the boys better hurry up or they are going to be in last place again. Josh finally gains some nerve and does it, they finish first but the girls are not that far behind them.

The caves are really cool and Jaymes & James, Trey & Lexi follow the music to find the clue for the Detour where they must choose between “spin it” and “bull it”. In “spin it” teams have to repair a 400 year old windmill. In “bull it” teams must enter a 100 year old arena and become a bull.

Jaymes & James decide to fix the windmill while Trey & Lexi decide to head to the bull arena. Lexi hurts her finger and Trey is very remorseful, but will she be able to finish the Detour? Jaymes & James are done repairing their windmill and are on their way to the Pit Stop at Castell de Bellver.

Both Josh & Brent, Natalie & Nadiya are repairing the windmill, while Trey & Lexi have finished at the bull arena and are heading to the Pit Stop.

Natalie & Nadiya are the last team to arrive at the Pit Stop, not knowing how to drive a stick shift really pushed them behind. But, the good news is that this is a non-elimination race so they are still in the game. In the next leg, the twins will have to complete a Speed Bump.