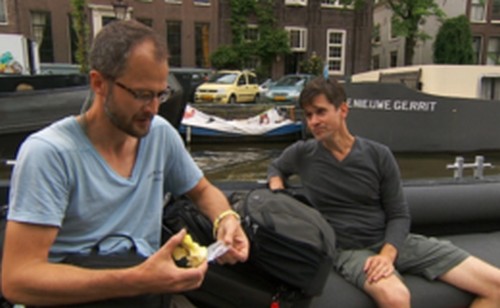 Emmy award winning, THE AMAZING RACE returns to CBS tonight with a whole new episode called, “Fishy Kiss.” On tonight’s show as the Teams arrive in Amsterdam, they come face-to-face with a game-changing Double U-Turn.  Did you watch last week’s episode of the season last week? We did and we recapped it HERE for you.

On last week’s show the competition heated up in Moscow.  James and Abba continued on their quest to recover a lost passport. Meanwhile, an ankle injury took a toll on one racer and threatened the team’s ability to finish a challenge.  James & Abba went to the Moscow police station, they talked to many people and really tried to get information. By the end of the show James & Abba were crushed that they would not be continuing on in the race as they are still without their passports and have arrived at the Pit Stop. Jeff notified the two that they have been eliminated from the race.

On tonight’s show the teams encounter one of the show’s most infamous challenges in this season’s “Switchback.”  As the Teams arrive in Amsterdam, they come face-to-face with a game-changing Double U-Turn.

Tonight’s episode 8 is going to be another fun one, which you won’t want to miss. So be sure to tune in for our live coverage of of the season 21 episode 8 of The Amazing Race — tonight at 8:00 PM EST! While you wait for our recap, hit the comments and let us know how excited you are about the new season of the Amazing Race?

Tonight’s episode: Five teams left, tonight we will find out who gets eliminated next. It’s the start of the ninth leg and Jaymes & James are the first one to get their clue, the must figure out that they have to go to the capital of the Netherlands, Amsterdam.

This round, Natalie & Nadiya want to get rid of Abbie & Ryan because they running for two million dollars rather than one. Meanwhile, Abbie & Ryan have all intention of winning this game and getting back to the front of it.

Trey & Lexi are lucky they get help from Jaymes & James because they thought they had to go to Paris, France.

The plan this leg is that if there is a Double UTurn, teams use it on Abbie & Ryan, but Jaymes & James are not comfortable with the plan as they don’t think they should lose a friend if they don’t have to.

All teams are book on different flights with Natalie & Nadiya being on the one landing first, but it is a connecting flight.

Natalie & Nadiya are the first team to arrive and decide to do the Fast Forward where they now have to head to Van Gogh Café to get on the Floating Dutchman bus where they have to eat five herring each. They complete the Fast Forward and are now headed to Rembrandt’s mistress’s house, the Pit Stop for this leg of the race.

Jaymes & James are in Amsterdam, while Abbie & Ryan are ready to leave Frankfurt when their plane has technical problems and is unable to take off.

Jaymes & James want to do the Fast Forward but they bump into the girls and find out that they already did it, therefore, they are headed to marked boats to take them to pofferjesboot.

Detour, experience two cultural gems, Back in Time where they have to work with extras to recreate a work of art, or Organ to Grind they have to find one of three organs, one person will grind the machine and the other will collect tips. Jaymes & James head over to grind an organ and when they aren’t making enough money, they strip off their shirts put on their Chippendales’ cuffs and collars to earn the cash.

Josh & Brent meet up with Abbie & Ryan at the airport, one of them is going to have to lose.

Jaymes & James are now at the Double UTurn, will they follow the plan? Yes, they U-Turned the team.

Teams now have to go Ditch Vaulting, Jaymes & James are the first team to attempt it and he does it in one shot, they are headed to the Pit Stop. Meanwhile, Trey & Lexi have collected all their tips at the Organ to Grind.

Jaymes & James are team number two to arrive at the Pit Stop. Trey & Lexi are at the Ditch Vaulting and also master it first shot. Meanwhile, Abbie & Ryan, Josh & Brent are all at the Back in Time and have just recreated their Rembrandts.

Trey & Lexi are team number three to arrive at the Pit Stop. Abbie & Ryan are shocked, they cannot believe that they have been U-Turned. Jaymes & James have no guilt, this is a game and they are in it to win it. Josh & Brent have a tough moral decision, do they go ahead, or wait for Abbie & Ryan.

Josh & Brent made the decision to move ahead, they are team number four to arrive at the Pit Stop.

Abbie & Ryan are the last team to arrive and have been eliminated from the race and don’t feel right about it, they think it is wrong for the Jaymes & James to back stab them. Really, are these two serious? This is a game and there is a lot of money on the line, I am sure Jaymes & James have friends at home and didn’t need to make to more and give them two million dollars.