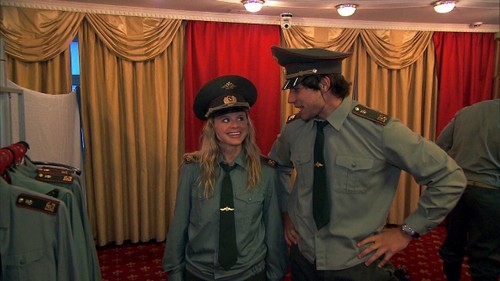 Emmy award winning, THE AMAZING RACE returns to CBS tonight with a whole new episode called, “We Was Robbed.” On tonight’s show as the competition heats up in Moscow, James and Abba continue on their quest to recover a lost passport. Did you watch last week’s episode of the season last week? We did and we recapped it HERE for you

On last week’s show the teams raced to Moscow, Russia, where they found themselves in deep water struggling to stay in sync during a challenge. Trey & Lexi were team number one to arrive at the Pit Stop and they have won a trip for two to Maui. James & Abba were the fourth team to arrive at the Pit Stop, but in order to stay in the race they needed to have their passports to check into the mat. Phil told them, they cannot check in without them.

On tonight’s show we find out if James & Abba find their belongings and are they the last team to check in? As the competition heats up in Moscow, James and Abba continue on their quest to recover a lost passport. Meanwhile, an ankle injury takes its toll on one racer and threatens the team’s ability to finish a challenge

Tonight’s episode 8 is going to be another fun one, which you won’t want to miss. So be sure to tune in for our live coverage of of the season 21 episode 8 of The Amazing Race — tonight at 8:00 PM EST! While you wait for our recap, hit the comments and let us know how excited you are about the new season of the Amazing Race?

Here we go; James & Abba don’t have their passports and need to produce them in order to check in even though they have arrived at the pit stop before some of the other teams.

Abie & Ryan are still sticking waiting with Josh & Brent at the pool, they used all their attempts and receive and penalty because they did not finish. Both teams head to the tree of keys; Josh & Brent finish quickly, but Abbie has a hard time.

James & Abba contacted the US Embassy to get new passports, at this point there is nothing else they can do.

James & Abba have good news, this is non-elimination race and they can continue in the race which means they will not only have to find their passports, but they will also have to complete a Speed Bump in the next leg.

It’s 8, Jaymes & James, Trey & Lexi gain entrance to the Agricultural Academy and receive their Road Block “who is in the zone”. Russia has nine different time zones, teams have to calculate the time zone in five different cities.

Natalie & Nadiya have decided to use their Express Pass for this leg. James & James, Trey & Lexi have finished the Road Block and moved on to the Detour where they must choose “movers” that require teams to learn and perform a Russian soldier dance or “shakers” where teams have to identify seven famous Russian lookalike leaders at a cocktail party. Both teams choose to dance and Jaymes & James have a rough time because of a injured ankle, but they manage to finish along Trey & Lexi and both teams now have to head to Sokolniki Park and the pit stop for this leg of the race.

Natalie & Nadiya have arrived at the Detour, the girls get on their uniforms but Natalie splits her pants and needs to change before they can learn the dance. Meanwhile, Abbie & Ryan are heading to the Agricultural Academy.

Jaymes & James are the first team to arrive at the Pit Stop and win a trip for two to Costa Rica. Trey & Leixi are team number two while Josh & Brent, James & Abba have yet to even begin the this leg. Natalie & Nadiya are the third team to arrive at the Pit Sop and Josh & Brent have finally left. James & Abba have borrowed someone’s cell phone and calling the embassy to get emergency passports.

Ryan is having a hard time trying to figure out the time zones, he has tried over 20 times and swears there is something wrong with the information he is given because he just can’t get it.

James & Abba are at the Moscow police station, they have been talking to many people and are still trying to get information. Josh & Brent are at the Roadblock and have to figure out the time zones, Ryan finally finished and he and Abbie are on to the Detour.