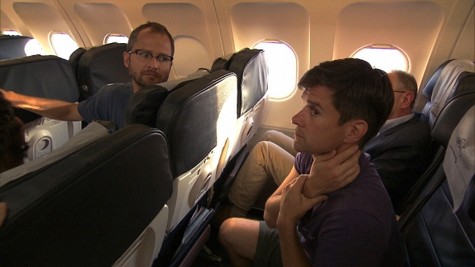 Emmy award winning, THE AMAZING RACE returns to CBS tonight with a whole new episode called, “Off to See the Wizard.” On tonight’s show Teams race to Moscow, Russia, where they find themselves in deep water struggling to stay in sync during a challenge. Did you watch last week’s episode of the season last week? We did and we recapped it HERE for you

On last week’s show the teams were in Istanbul, Turkey – Teams endured a steamy detour in Istanbul to keep their race from getting scrubbed. Meanwhile, after finishing last on the previous leg, Josh and Brent had to overcome a tasty Speed Bump in order to keep their hopes of racing alive.

In a shocking event last week which went down at the travel agency –  fan favorites, Rockstar & Lawyer, James & Abba dropped a wad of cash inadvertently and Twins Natalie & Nadiya stole it! Yep, they actually took the money! Trey & Lexi also knew about the theft and get this, they split the money!  We conducted a viewer pole and 40% felt both teams should have been penalized and over 30% of people thought the couples should have been sent home.  It will be interesting tonight to see if Phil addresses the fan’s outrage.

On tonight’s show Teams race to Moscow, Russia, where they find themselves in deep water struggling to stay in sync during a challenge. Meanwhile, one team makes a costly mistake that threatens their spot in the Race.

Tonight’s episode 7 is going to be another fun one, which you won’t want to miss. So be sure to tune in for our live coverage of of the season 21 episode 7 of The Amazing Race — tonight at 8:00 PM EST! While you wait for our recap, hit the comments and let us know how excited you are about the new season of the Amazing Race?

Last week Rob & Kelly were sent home, tonight we will find out who will be leaving next.  Istanbul is the start of the seventh leg in the race around the world; Trey & Lexi are next and have to fly to Moscow, Russia.

James & Abba are next to depart and still think they are stronger than a lot of the other teams. At the airport, Trey & Lexi are not doing that great to book their flight and other teams are closely behind them. Abbie & Ryan get on the internet quickly and book their flight before a lot of the other teams.  Josh & Brent are in last place but they a lot of personal encouragement after making it through a speed bump in the last leg and not finishing in last place. There are three flights, arriving at 2am, one at 4am and the flight Josh & Brent and Abbie & Ryan are on is delayed and caused they to miss their connecting flight.

James & Jaymes, Abba & James are all landed in Moscow, so have Trey & Lexi, Natalie & Nadaya.

In Moscow, teams must now find Ivan The Terrible’s guards to get their next clue, James & Abba are the fest team to find them and receive their next clue, a Detour. There is a choice of two tasks, “Alphabetise” where teams have to visit the Russian library and find four books with only Russian instructions to guide them. In “Synchronized” teams have to go swimming with Russia’s famous synchronized swimming team to learn their craft and the swimmers think they are in sync; they will get their next clue.

All teams are having a hard time at the Detours, nobody seems to be doing any better no matter which one they tried, they are both tough. Surprisingly, Trey & Lexi finally figure out the Russian alphabet and are on there way to finding their four books. Meanwhile, Natalie & Nadaya are doing the synchronize swimming and are having such a hard time that they think they are setting themselves up for failure and just might use the Express Pass.

Trey & Lexi get their next clue, they have to find the “tree of love” where they have to figure out which key on a ring of keys opens all the locks and releases the race ribbon and their next clue. James & James finish the synchronized swimming and also head to the “tree of love” but before they leave, they convince Natalie & Nadaya to hang in there are not use the Express Pass.

Josh & Brent and Abbie & Ryan decide to make pact and run the race alongside each other.

The next clue is a ruble with a picture of “The Bolshoi” on it and teams must figure out that that is their next destination and the pit stop for this leg of the race.

Trey & Lexi are team number one to arrive at the Pit Stop and they have won a trip for two to Maui. Meanwhile, Josh & Brent and Abbie & Ryan have finally landed in Moscow, they are half a day behind everyone else.

James & Jaymes are team number two and James & Abba have made at least twenty attempts at the synchronize swimming and finally get it. Josh & Brent and Abbie & Ryan arrive at the Detour but they have no choice but to do the synchronized swimming as the library is closing for the day.

Natalie & Nadya, the team that stole James & Abba’s money last round are team number three and not happy – they think they should have arrived better than third place. Wow, somebody has to tell these two women that third is better than last, duh.

James & Abba get of their taxi at the “tree of love” and leave their belongings in the taxi, only to have the driver leave with them. The two complete the Detour and head to the Pit Stop, they have some money on them but are missing their belongings which includes their passports.

Abbie & Ryan have finished the Detour and stay true to their word, they wait for Josh & Brent to finish.

James & Jaymes are the fourth team to arrive at the Pit Stop, but in order to stay in the race they need to have their passports to check into the matt. Phil tells them, they cannot check in without them.

That’s it for tonight, they end the show there and we have to wait until next week to find out if James & Jaymes find their belongings, are they the last team to check in?