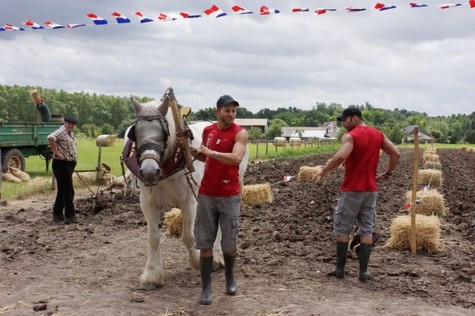 Emmy award winning, THE AMAZING RACE returns to CBS tonight with a whole new episode called, “Take Down The Million.” On tonight’s finale show the  final four Teams will head from Spain to France and they will race the final leg of the race for $1 Million dollars . Did you watch last week’s episode of the season last week? We did and we recapped it HERE for you!

On last week’s show in Detour B, Dating Couple Lexi and Trey had to run an obstacle course through the capes of eight Matadors while dressed as a bull in order to receive the next clue.    The final four Teams arrived in Spain and travelws to Rafael Nadal’s practice courts for a volleying Roadblock. Also, one Team drew  blood after getting bullish with a Detour.  Natalie & Nadiya were the last team to arrive at the Pit Stop, not knowing how to drive a stick shift really pushed them behind. But, the good news for them was, it was a non-elimination leg of the race so they were still in the game. In the tonight’s leg, the twins will have to complete a Speed Bump.

Tonight’s season finale episode is going to be another fun one, which you won’t want to miss. So be sure to tune in for our live coverage of of the season 21 episode 11 of The Amazing Race — tonight at 8:00 PM EST! While you wait for our recap, hit the comments and let us know how much you enjoyed season 21 of the Amazing Race.

Tonight’s episode: It is the start of the eleventh leg and Trey & Lexi are the first team to depart, they must fly to Barcelona, Spain and once there make their way to Fr Loire Valley in France.

Once on the train to France, the three teams are surprised when Josh & Brent walk in who overheard that they have an alliance.

Teams must now puck up eight crates and load them into their marked cars by kicking the back of their vehicles. Once loaded, they must head to Chateau Villandry to the Stone Dog to get their next clue.

Trey & Lexi are feeling good in the lead of the pack, will they be able to maintain though through the last leg? At the castle, the teams are in search of the Stone Dog. The next clue leads the teams to Leonardo Davinci’s final resting place, Chateau D’Amboise. Natalie & Nadiya having arrived last in the last leg and it being a non-elimination race, have to complete a Speed Bump now. In this task, the girls have to help a women dress in an 18th century costume. It doesn’t take long for the women to finish the Speed Bump and lucky for them, the other teams are lost, this may prove to be to their advantage.

Trey & Lexi, Jaymes & James, Natalie & Nadiya have arrived at the Detour. Teams must now choose to Chow: where teams must make the daily meal for a pack of hungry dogs or Plow: where teams to use a traditional horse and plow to till a field.

Trey & Lexi decide to plow because Lexi is familiar with horses, having some on her ranch. Natalie & Nadiya have unbelievably caught up with the other teams. Josh & Brent are with the girls chopping and preparing food for the hungry pack. Meanwhile, Jaymes & James decide to head over to the plow and give it a try but are not having an easy job of it like Trey & Lexi who are now finished and heading to Les Caves Des Roches. Josh & Brent beat the girls at preparing the food for the pack and are also on their way, with Jaymes & James to the caves.

Once at the cave, they have to search the dark maze of tunnels to find ten each of three different kinds of mushrooms. Lexi & Jaymes are running through the tunnels for their respective teams while Josh & Brent, Natalie & Nadiya have yet to arrive. Lexi did it right the first time and are heading to the Pit Stop at the Chateau de Chenonceau. Jaymes missed it the first time, but on the second run through the caves, he does it.

Jaymes & James are the first team to arrive after eleventh legs in the race, they will be racing for a million dollars as well, they have both won the redesigned the Ford Escape. Trey & Lexi are team number two.

It’s the start of the twelve leg, teams are heading to New York, NY and they must figure out that their postcard is having them head to Coney Island. Josh & Brent have the hometown advantage, both being from New York. All teams are now flying to their final destination and have dumped their baggage in celebration of them almost being at the finish line.

The teams are at the boardwalk and are searching around for their next clue. All teams are confused and cannot find the clue. Trey & Lexi figure it out first, there is a clue on the Houdini sign, they have to race to the Brooklyn Navy yard. The only team not to figure it out is Jaymes & James who are still wondering around the beach.

Next for the teams is a Detour where they have to hang upside down in a straight jacket like Houdini and they have to get out of it. Trey goes up for his team,he is afraid of heights but he is managing well, until the jacket is off and he is dropped – but just enough to get rid of his fear of heights. At this point, teams have to head to the first pizzeria of New York, Lombardi’s. The other two teams are not far behind – they are all fighting really hard.

Teams must now memorize three orders and deliver pizzas, once they deliver them correctly they must return to the pizzeria to get their next clue. Jaymes & James have fallen into last place. Josh & Brent are in second place, but they have delivered the wrong pizzas. Trey & Lexi are still in the lead and doing very well. Jaymes & James have a chance to catch up and assume second place.

The United Nations Headquarters is the next place where they have to head to receive their next clue. It’s a Roadblock and teams have to identify the word hello in the nine different countries they visited, once it is done, they will get their final clue. Lexi is already hard working on the Roadblock when Josh & Brent arrive and are ready to try and catch up.

All teams are at the Roadblock and are having a hard time, they are all relying on educated guesses. The lead no longer means anything because all the teams are struggling with this Roadblock and the smartest thing they can do is do this task mathematically, since they all don’t know the real answers. Josh & Brent are the first team to finish and are headed to the Finish Line at Gotham Hall. Jaymes & James are also finished and heading in second place to the finish line. Meanwhile, Trey & Lexi are stuck at the Roadblock and appear to be going nowhere.

Josh & Brent are the winners of The Amazing Race, the underdogs have won.

Jaymes & James are the second team to arrive at the finish line, Trey & Lexi are in last place.