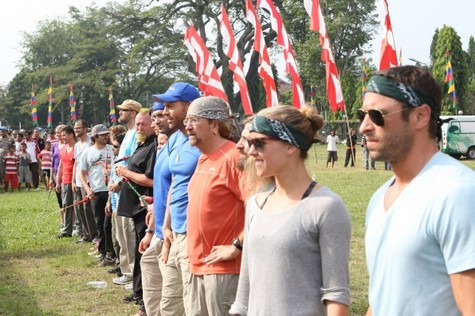 Emmy award winning, The Amazing Race returns to CBS tonight with a whole new episode called, “Long Hair, Don’t Care.”  On this week’s show the teams continue racing on the second leg of the race as they head from China to Surabaya, Indonesia.  Did you watch the premiere of the season last week?  We did and we recapped it HERE for you!

On last week’s show pressure hits an all-time high as Teams discover that a new twist will allow one Team to possibly win a $2 million grand prize. Meanwhile, one team’s act of kindness came back to haunt them.  Gary and Will were determined to do well and freely admit that they’ll do whatever it takes- cheat, lie, whatever. They’re still in the race at team number 8 with Trey and Lexi right behind them as team 9.  The Chippendales, Jaymes and James beat Rob and Sheila by 15 seconds and those seconds were the difference between staying or leaving the race.  Rob and Sheila were the first team to leave.

On tonight’s show which airs at a special time 8:30PM EST, as the race continues in Surabaya, Indonesia one Team makes a bold move, but it could cost them the game, while another Racer breaks down amid the frustration of a Roadblock.  Daniel and Amy and Abbie and Ryan must ride on motorbikes alongside champion bull riders to the finish line in order to receive the next clue on The Amazing Race.  In Detour A, Married Monster Truckers Kelley and Rob must deliver ten blocks of ice to the Pasar Ikan Pabean fish market in order to receive the next clue.

Tonight’s episode 2 is going to be another fun one, which you won’t want to miss. So be sure to tune in for our live coverage of of the season 21 episode 2 of The Amazing Race — tonight at 8:30 PM EST! While you wait for our recap, hit the comments and let us know how excited you are about the new season of the Amazing Race?  Check out the sneak peek video of tonight’s episode below.

Tonight’s episode: China is the start of the second leg across the world. Abbie & Ryan are the first team to depart and must travel to Surabaya, Indonesia. The winner of this round will win the Express Pass.

Rob & Kelley are running their own race and while everyone else is on the same flight, they are on a connecting one through Hong Kong. Once they’ve landed, the worry starts to settle in that no other teams are with them.

James & Abba are the first team to arrive in Indonesia with many other teams are not too far behind them. They arrive at their destination and are number one, Abbie & Ryan fell a little behind, they are number three. The teams now have to wait till the next morning at 8:00am to complete the task.

Rob & Kelly are on the connecting flight to Indonesia, while Kelly is still worried Rob thinks they are in the lead.

Rob & Kelly finally arrive in Indonesia, they are in last place. Teams now have to participate in bull racing where they board a motorcycle and have to race two bulls pulling a cart and a driver.

James & Abba are still in the lead, they head to the Roadblock  where they have to peddle a machine that gives children a ride while they make balloon art; eight balloons in total. Once finished, the teams have to head to Wijaya Motor Shop where they have to search for their next clue.

The teams arrive at a Detour, they have to choose from either Ice By The Pound where they have to transport 10 sixty pound blocks of ice or Fish By The Barrel where they have to sort through thousands of fish, prepare the stall until it is ready for business. While eight teams are on to the Detour, Rob & Kelly and Gary & Will are still making balloons at the Roadblock.

Gary tries to calm Will down because he is sweating and really getting upset that he hasn’t even made one balloon. Meanwhile James & Abba’s taxi driver brought them to Wijaya Tire, not Wijaya Motor.

With Gary’s encouragement, Will finally finishes the task and they are headed to the Detour. Amy & Daniel, Caitlin & Brittany, Rob & Kelly are also lost and terribly frustrated.

Natalie and Nadiya are the first team to finish their Detour, they did Fish By The Barrel. Trey & Lexi are next, both teams are striving to be the first to find Phil and be the  first team to finish this leg and win the Express Pass. Natalie and Nadiya are team number one, they have won the Express Pass. Trey & Lexi are team number two, meanwhile James & Abba have finally arrive at the Detour with Caitlin & Brittany close behind them.

Gary & Will are on their way to the Detour and little did they know that two teams also did not arrive yet until they see Rob & Kelly get out of a cab.

Gary & Will are team number nine and still in the race. Amy & Daniel are the last team to arrive and eliminated from the race.