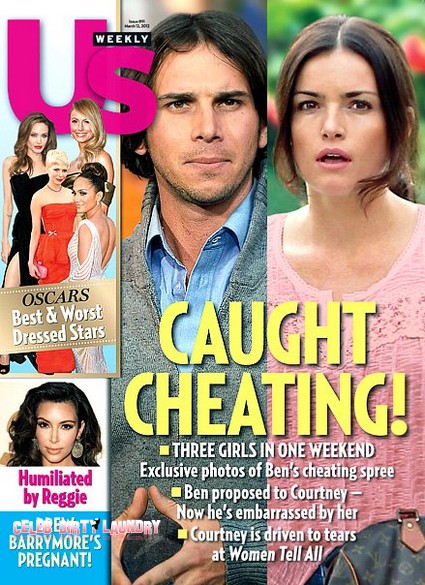 The March 12th issue of US Weekly features the cover story ‘Bachelor Ben – Caught Cheating.’  The magazine claims that The Bachelor Ben Flajnik was caught cheating.  Now get this he had three girls in one weekend and US has the exclusive photos of Ben’s cheating spree.  Even though Ben proposed to bachelorette Courtney Robertson he has become embarrassed by her and her bahaviour.

Us Weekly claims that  during ‘The Women tell all’ this week she is driven to tears.  Hard to believe that she would cry – Courtney has become the women who viewers and the other ladies of the show love to hate.  This  is going to be the first Bachelor that one of the final two appear at the ‘Women tells all’ episode.

The Bachelor host Chris Harrison revealed to TV Guide on whether he bought Courtney’s apology about how she treated the other women.  “The big question is if anybody is buying it. She’s trying to do some serious damage control and fix this and this is something we’ll continue to talk about at the Women Tell All. Can she even make this right? And at some point, is it on the viewer or the other girls to not accept an apology and if not, are you not any better than Courtney is? I think she’s doing everything she can to fix it, but it’s up to Ben and the people watching to see if they buy it, and right now public opinion is still not buying it.”

Are you buying Courtney’s apology or do you think she is just saying what she thinks Ben needs to hear?  I am not buying it at all.  Sound out in the comments below and let us know.  You can catch all our Bachelor coverage from this season here!

Also included in this issue the magazine has all the details on how poor Kim Kardashian has been humiliated by Reggie Bush.  It seems Reggie is seeing another women and is not interested in Kim.

To find out all these details and more, pick up the current issue of Us Weekly!