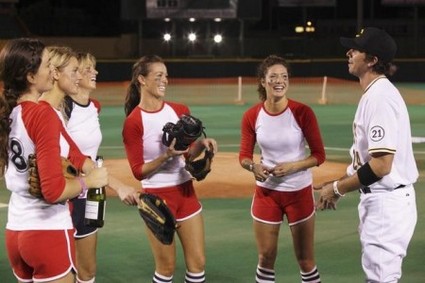 Did you watch The Bachelor tonight? We did and and we recapped it for you here. In our wrap-up we have some observations of last night’s show and some questions.  Poor Emily is worried about Courtney, what do you think, does she have reason to worry?

Nicki finally got a one-on-on date with Ben and of course he sucked face with her like he does all the girls, did you see the look on Courtney’s face when they left in the helicopter? Priceless! I didn’t see the connection between Nicki and Ben, did you? I doubt he will pick her in the end, I don’t think he likes the idea that she was married before, what do you think?

I loved the “diamonds are a girls best friend” date for nine of the women; Lindzi, Casey S., Blakeley, Emily, Jennifer, Jamie, Rachel, Kacie B. and Courtney. Some of the girls were genuinely happy to see that it was a baseball diamond, but some were disappointed it wasn’t real diamonds. Did you see the look on Courtney’s face? She is obviously only in it for the prize, what do you think?

When Ben choose Lindzi as the MVP I thought Courtney was going to scream, didn’t you see her jealousy? I think maybe Courtney has a little something to worry about with Lindzi, don’t you think she may just make it to the end?

Elyse got the second one-on-one date and I found it very sad, didn’t you? She opens up to Ben only to have him dump her during dinner. Really, I think he should have let her go and not taken her on the date, don’t you find it humiliating when it was so clear that he was just not into her?

When Elyse’s bag was picked up in front of the other girls I couldn’t believe how Courtney looked – like the cat that swallowed the canary, what did you think? I think she is a shallow bitch and I am surprised Ben can’t see right through her.

Emily just can’t keep her mouth shut when it comes to Courtney, can you blame her? While she is trying to make Ben see clear to who Courtney really is, he is just so freaking blind about the whole thing, it’s driving me nuts, what about you? Don’t you want to just shake Ben and make him see Courtney for what she really is?

Were you surprised that Jennifer went home? I was. I really thought that Emily was going to be given the boot because of what she said about Courtney. I bet Chris convinced Ben to keep Emily, for ratings anyway, nothing like a good cat fight!

Make sure to come back next Monday when we will be live blogging the 6th episode with all the juicy details!