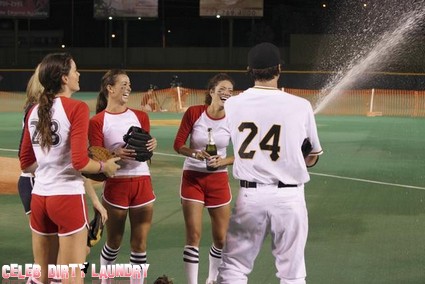 The Bachelor Ben Flajnik whisks the remaining 11 bachelorettes to the Caribbean paradise of Puerto Rico on the 5th episode of The Bachelor.  Stand by as we live blog the episode for you with all the up-to-the-minute details.  On last week’s episode Monica Spannbauer was sent home.  If you missed last week’s episode you can read our official recap here!

Tonight the Bachelor goes to Puerto Rico and get a trip to the famed Roberto Clemente Baseball Stadium. It’s all good fun as the group enjoy their time in the field. But then Chris Harrison informs them they will be playing a game against each other to decide who will get a beachside after-party with Ben. The losers will go back to the hotel.

Ben chooses one lucky woman to be his MVP – playing on both teams and assured of a ticket to the after-party. For the rest of the bachelorettes, it’s game on! Rabidly competitive, the women battle until the last dramatic out, provided by one devastated woman who strikes out and takes the whole team down with her.

Ben opens up to one of his sweethearts and then offers her the rose, but Courtney steals the show by privately inviting Ben to a secret rendezvous that is a tempting mind blower: come skinny dip with me!

We will be live blogging the show with all the up-to-the-minute details and all the highlights and bitchiness at 8PM EST.  So come back and see what we are talking about, make sure to refresh often!  In the meantime as you wait, you can read some spoilers for tonight’s episode and see a sneak peek video here!

RECAP: The bachelor and his girlfriends are in Puerto Rico. Coming into this episode, Emily is worried about Courtney, will she’ll try and get revenge on her for telling Ben about her real personality? Chris welcomes the girls and tells them that there will be three dates, a group date and two one-on-one dates. The good news, all the girls get to go on dates this week. Chris leaves them the first date card, Nicki gets the first one-on-one – Courtney is disappointed and extremely jealous.

Nicki is so excited to get her date with Ben, but packs her bags just in case because if he doesn’t give her a rose, she is going home. Ben has a fun day planned, their mode of transportation is a helicopter.  The two start their date by getting stuck in torrential rains, which spoils Ben’s plan for a walk around town date. Ben comes up with a plan to buy new and dry clothes for the two of them. Ben is dressed in white suit and hat, looks like Rico Suavé, the two head to Old San Juan to visit some wedding chapel. It’s time for dinner, Ben wants to talk about Nicki’s past and find out more about her failed marriage. Nicki tells Ben that all her marriage wasn’t bad, they tried couples therapy for three months, but it just didn’t work out because she lost trust with her ex.

Meanwhile, the girls receive the next date card “diamonds are a girls best friend” for nine of the women; Lindzi, Casey S., Blakeley, Emily, Jennifer, Jamie, Rachel, Kacie B. and Courtney.

Ben is really happy, he feels that Nicki has totally opened up, she has a lot of qualities that he is looking for, she gets the rose.

Ben is in love with baseball, so it’s very appropriate that he take the girls to the baseball field, so it’s actually “baseball diamonds are a girls best friend”. The girls get a little try out on the field, but Chris shows up to make an announcement – there will be an incredible romantic beach party tonight, but everyone will not be invited. The girls have to separate into into two teams, the winning team are invited to the beach party. Because there is an odd amount of girls, Ben chooses Lindzi as the MVP, she will play on both teams and get an automatic invite to the beach party. The red team won; Courtney, Jamie, Casey S., Kacie B and Lindzi, the MVP. Ben takes Kacie B. aside and tells her that what he likes most is that she gets him to open up, he gives her the group date rose. Courtney is furious, she thinks Kacie B. is a little girl and what Ben needs is a woman. Courtney asks Ben if they can go for a walk, they go down to the water and she lays a couple of hugs and kisses on him. She tells him that she wants a secret romance with him, go skinny dipping, share a bottle of wine.

Elyse gets the next one-on-one date with Ben, they are going on a yacht. She starts to tell him that she gave up her job to be with him, as well as her best friends wedding. Ben decides it would be a good idea to jump off the yacht, the two get down to the swim things and take the plunge holding hands. Elyse thinks that so far it is the perfect first date, they are now at dinner and Elyse asks Ben if he has any concerns. Ben asks her what she meant by having accomplished everything that she wanted to. She explains that everything basically is in place for her to find her significant other, Ben looks awkward. He tells her that there has been some mis-connections between the two and that is why he wanted to bring her on the boat and be alone with her, but he was looking for something that he just didn’t find in her. Poor Elyse is heartbroken, Ben tells her that he has to follow his heart, he cannot give her the rose.

The rest of the girls are all together when a guy comes into the room and grabs Elyse’s bag, everyone is shocked, but Courtney is thrilled and isn’t shy about it.

Ben returns to his room after dumping Elyze to find Courtney in a robe, with a bottle of wine and two glasses. Ben is shocked, he didn’t think she would break the rules to spend time alone with him. (are you kidding me, he is such a moron) Courtney suggests that they go down to the beach, they both head down, Courtney in her bath robe and Ben in his suit. Courtney asks if he wants to go skinny dipping and Ben asks “Are you going full nude while we get in?”  Courtney’s reply “Well we can go in our underwear if you want.” To hell with that, the two take off all their clothes and skinny dip, fully nude.

At the Rose Ceremony, Ben feels crappy that he was intimate with Courtney last night. Ben doesn’t waste any time sucking face with a lot of the girls. Emily completely dismisses Ben’s warnings and once again, Emily decides to bring Courtney back into their private conversation – calls her kind of a weirdo and it bothers her that she is deceptive and he doesn’t see that side to her. Ben tells her again to tread lightly and let go. Personally I think it is shocking that Ben can be such an idiot that he can’t see through Courtney – she is such a shallow bitch.

Time to give out the roses, Nicki and Kacie B. already have one each, next are; Lindzi, Jamie, Rachel, Courtney, Casey S., Blakley and the final rose goes to Emily. Jennifer is heading home, this is shocking – I thought he would send Emily home after she bad mouthed Courtney again.

Upcoming episodes are going to see drama between the girls and Courtney explode, and their is a rumour that one of the girls has a boyfriend at home.  Kacie B. also comes forward and speaks her mind to Ben about Courtney, it is all going to be worth watching til the very finale where many will be shocked.  I can’t wait to watch the rest of the Bachelor season 16 and if you miss any of the shows Monday night, you can read all the recaps of every episode of the Bachelor right here on CDL.