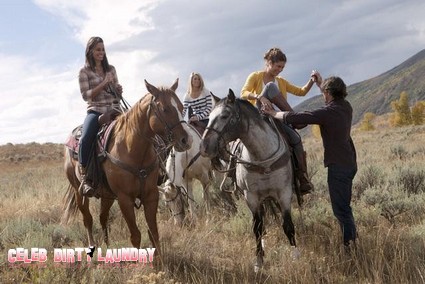 Tonight is an all new episode of Season 16 The Bachelor with Ben Flajnik and we will be live blogging it for you. On last week’s show jaws dropped and tempers flared when former finalist Shawntel Newton showed up at Ben’s third rose ceremony.  She said, “I’m here to date Ben.’  All the girls thought she had a lot of nerve.  However, rumor has it that Ben and Shawntel had a secret romance before filming began last summer.  That is why she was so confident that Ben would want to pick up where they left off.

But things did not work out how Shawntel thought, Ben addressed the girls and told them that he just can’t give out the final rose tonight, Erika Uhlig and Jaclyn Swartz are going home, along with Shawntel who never receives a rose from Ben after showing up uninvited.  If you missed last week’s episode you can read our recap here!

Tonight the Bachelor goes a little bit country.  Ben and Jennifer Fritsch go on a one-on-one date and get serenaded by Clay Walker.  At the end of the ballad Ben kisses her, and Clay asked him, “So is she a good kisser?” and Ben replied she was the best kisser thus far. He asked the same to Jennifer and she said Ben was a great kisser as well.    She gets a rose from Ben so she is safe at the rose ceremony.

The group date this week sees the girls fly fishing and horseback riding with Ben. Another lucky lady gets a rose.

We will be live blogging the show with all the up-to-the-minute details and all the highlights and bitchiness at 8PM EST. So come back and see what we are talking about!

RECAP: Ben and the girls head to Park City, Utah and Chris advises the women that if they go on a one-on-one date with Ben, pack your bags, because if they don’t get a rose on the date, they go home immediately.

Rachel gets the first one on-one-date “Let Nature Take It’s Course”. Kacie B is really upset that she didn’t get the date, it’s getting harder and harder for her to see him go on dates with other girls. Nicki is jealous whenb Ben picks up Rachel by helicopter and they take a scenic drive over the mountains.

On the second part of their date, they go through a romantic walk in the woods. Ben tells Rachel that he is left confused about how he feels about her. At dinner, you can cut the awkwardness with a knife – they start talking about relationships and Ben puts Rachel on the spot but she confesses that she was not good at communication in her past relationships. Ben is really happy that she is opening up, he feels a spark and wants to see where it can go – she gets a rose and lots of smooches.

Meanwhile, back at the house Courtney finds out that she is on the group date and tries her best to show that she is optimistic, but you can really tell that it is killing her.

It’s time for the group date and Ben comes riding in on a horse and announces that they are going to start their date with horse back riding. Afterwards, everyone gets into the river for some fly fishing. Ben searches out Kacie B and gives her a bit of alone time, Courtney spies them and decides she is going to turn this group date into a one-on-one.

Back at the house, the main topic is Courtney and they all look forward to the she she leaves.

Meanwhile, Ben loves spending time with Courtney and he also gets some alone time with her but Lindzi moves in on the two of them and since she has experience fly fishing, she thinks she has this one in the bag until Courtney catches a fish.

Courtney feels like she had a magical date with Ben (duh, wasn’t she on a group date?) and believes she deserves the rose. It’s later in the evening, everyone is having drinks and chillin’ when Ben asks to spend some time with Casey S., but not much, because one girl after the other interrupts. Samantha is last person to interrupt and after a quick conversation with Ben, he sends her home immediately because she mentioned that she had only been on group dates, that’s rough.

Ben invites Kacie B. to his room, he tells her that he wanted to kiss her so bad in the river and he’s sorry. A couple of kisses and lots of reassurance, Kacie B. feels so much better and Ben looks like he is completely smitten.

Meanwhile, Courtney is pissed that Ben spent all that time with Kacie B. Coincidentally, Ben comes out to search for Courtney and invites her up to a private area in front of a fire place. Courtney tells him that she is having a rough go of it when he is around the other girls, Ben knows she needs the reassurance and keeps telling her that he likes her. He gets up and goes to get the rose to give to Courtney for reassurance, so essentially, it’s the pity rose. When Ben went to get the rose, the cameras showed Courtney saying “winning”, what does she thinks she is, one of Charlie Sheen’s ex-goddesses?

Ben picks up Jennifer for the last one-on-date and Courtney sizes her up before they leave, she predicts they will only be friends and no rose will be given out. The two go on a crazy date, they are going to propel down a 300 foot crater. The date moves on to the evening, Ben is looking forward to it and happy that Jennifer is a good kisser. After a gondola ride, they have dinner and Jennifer tells Ben that she was in a four year relationship and he didn’t wanted to marry her, so she walked away.

Back at the house, the women are all bitching about Courtney again – there really isn’t many girls in the house that like her.

Ben goes and gets the rose, he honestly tells Jennifer that he wasn’t sure what the outcome would be, he gives her the rose. They take a  gondola ride back and attend a Clay Walker concert. Wow, for a guy that was smitten with Kacie B., he sure locked lips enough times with Jennifer! Good thing Courtney was no where in sight, she would have had a fit.

It’s time for the cocktail party, the three girls who have roses are Courtney, Jennifer and Rachel.  Emily get some alone time with Ben and tells him that there is one girl that is different from anyone else in the house and it bothers her that she got the rose at the group date. Ben tells her that it is going to end up driving her crazy and cause her own demise. Emily has an argument with Samantha over Courtney, she calls her rude, calculated and much more, Samantha runs right to Courtney and tells her everything. Courtney tells Samantha now that Emily has crossed her, she better watch herself.

Monica Spannbauer is sent home, Ben announces that they are going to Puerto Rico and Courtney says, “Oh, I was there last week”. What a bitch. Don’t forget to come back next week when Courtney kicks it up a notch and gets naked with Ben.