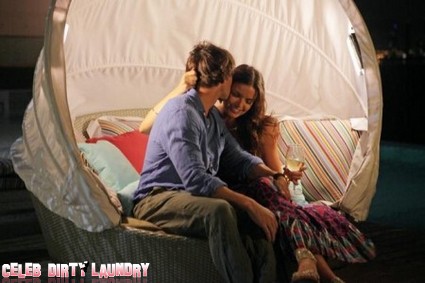 Did you watch episode 6 of The Bachelor tonight? We did and and we recapped it for you here.   In our wrap-up we have some observations of last night’s show and some questions. The show is getting so good and the better the show gets, the bigger skank Courtney becomes. I swear if she doesn’t win Ben’s heart, she just might have a chance on Jersey Shore, what do you think?

I was shocked when Courtney went nude under her skimpy tribal outfit, how did you feel? Don’t you think she should be a little more modest like the rest of the girls? During the cocktail party with the group date Courtney was such a bitch. Ben finally has a little alone time with Jamie and Courtney comes swimming by, flirting with Ben. I was really shocked at Ben’s reaction, he was so rude – I can’t believe how he ignored Jamie, didn’t you think he was a real Jerk?

I really wish Emily didn’t try to make up with Courtney. What did you think about Courtney telling her that she doesn’t forgive and forget? I thought she was a heartless bitch. Did you notice that Ben didn’t stop by Courtney’s room when she dropped her room number in hopes of making out with him? That was the best part of tonight’s episode.

What did you think about Blakely’s confidence going into the two-on-one date? I have no idea where that came from since Ben was never close to her anyway and it was no surprise to me when Ben gave her the boot, were you surprised?

I couldn’t believe how much of a big deal Chris made of Casey being in love with someone back home. Didn’t you think the drama was a little ridiculous and over done? It seemed as if someone had died.

I was really disappointed tonight that Courtney didn’t see Jamie straddle Ben, I think it would have been hilarious to see her reaction. What do you think, would that have not been great TV?

I wasn’t surprised that Jamie went home tonight, but I did think it was a little humiliating, didn’t you?

Next week Ben gets three one-on-one dates; Courtney, Emily and Lindzi – one of them heads home at the Rose Ceremony. Who is it you ask? Well, you will just have to come back next week to find out.  See you then!