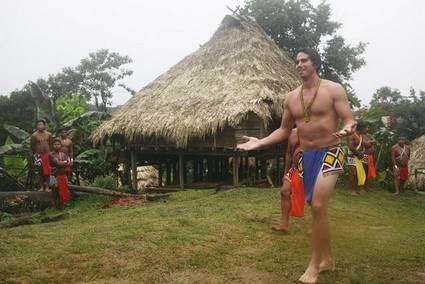 A whole new episode of The Bachelor Ben Flajnick Season 16 airs tonight at 8PM.  Tonight things get steamy as the Bachelor heads to Panama.  Stay tuned with us as we live blog the show with all the up-to-the-minute details!  On last week’s show Jennifer headed home, I was shocked – I thought he would send Emily home after she bad mouthed Courtney again.  If you missed the show you can read our recap here!

On tonight’s show six lucky women “get lost” with Ben in the middle of the Panamanian jungle at the bank of the Chagres River. The Bachelor scoops up the ladies in a motorboat and the group zip through the jungle waters before coming upon the Emberas in their small village. The people warmly welcome Ben and the women, but one bachelorette decides to take local customs a bit too far and dons some native garb that leaves little to the imagination.

That evening at the after-party at the Trump Ocean Club, Courtney continues her strategy to win Ben’s heart with her brash, aggressive behavior. But will this off-putting demeanor score her another rose?

The Bachelo airs at 8PM EST tonight and we will be live blogging the show with all the up-to-the-minutes details, so come by and spend the evening with us.  Make sure to refresh often to get the most current updates!  While you wait for the recap you can read some spoilers and see a sneak peek video here!

RECAP: Tonight there is a one-on-one date, a two-on-one date and a group date. Ben arrives with the first date card, it’s the one-on-one and Kacie B. gets it. Courtney is jealous and tries to talk her herself into believing that Ben picked her because he wants to get rid of her. Ben arrives with yet another helicopter, his favorite mode of transportation – he loves trumpin’ it. This date is important to Ben, he wants to make sure that his feelings are still there for Kacie. B., they are heading to a deserted island.

The couple cut coconuts, build a fire, catch a fish and cook a fish – how exciting, bet Courtney would think her skinny dipping last week was more exciting. Ben and Kacey B. are now at dinner and Ben is looking at really diving in now. The two are talking and there seems to be a little awkwardness in the conversation flow. Kacie B. confides in Ben that she had an eating disorder but he really doesn’t seem that interested.

Another date card arrives, it’s the group date with Lindzi, Jamie, Emily, Nicki, Casey and Courtney – this means that Blakely and Rachel get the two-on-one date.

Ben tells Kacie B. that he wants to learn more about her and gives her the rose.

This is Courtney’s third group date and she’s so over it. Ben arrives in a boat for trip through the jungle that he is navigating for the women. They stop at Embera village to find that all the tribe are excited to see them. The women start grabbing them all and bringing them into huts. The tribe women want Ben’s girls to wear these beaded tops and most of the women are modest, except for Courtney, she goes full on by taking off her own clothes and Ben appreciates it, or appreciates the view. Meanwhile,

The tribe arrives with tattoo paint and Courtney jumps at the chance to write B+C with heart on Ben’s back. Courtney starts dancing and almost has a malfunction with her tribal skirt but laughs it off. She moves on over to Ben and starts shaking a barely covered breasts in front of him, what a slut!

It’s time for a little cocktail party with Ben’s group date girls. Lindzi gets some alone time with Ben and admits that it is hard dating him alongside all the other girls. Ben moves on next to Courtney and she drops her room number to him, 1611 and invites him over later in the evening. Next is Jamie and she is ready to plant a kiss on Ben tonight to show him how she feels, but Courtney spoils the moment by swimming by in a bikini and Ben can’t concentrate. Courtney gets out of the water, lays down and poses – she rubs her hand up and down her stomach staring over at Ben and while Jamie is talking, he turns his head. What a freaking loser! I can’t believe how disrespectful Ben is, he’ll turn his head and dis Jamie for a piece of trash like Courtney.

Back in her room, Courtney gets all ready waiting for Ben to come to her room. After a very long wait, he never showed up.

It’s time for the dreaded two-on-one date. The girls will be doing some Latin dancing with Ben. The two women first have to change into their salsa dresses.  After a considerable amount of effort on Blakely’s part, Ben lets her go home. It’s a tearful goodbye, I don’t think she saw this one coming. Rachel looks like the cat who swallowed the canary, she’s got a rose and doesn’t have to worry about being sent home.

Chris pulls Casey to the side about a relationship that she has with a guy at home, he makes her fess up to Ben and tell him the truth. Ben tells her that he wishes that she had been honest from the beginning because he sent home women that wanted to still be there and it’s not fair. Casey is heading home, Chris tells her that he truly believes that she was on the show and had good intentions. Casey is in a mini van on the way to the airport and she’s trying like someone died.

Meanwhile, the other girls are really wondering what happened. Chris tells them that she was in love with another man coming on to the show, Ben told her to be open about finding love and Chris advises the girls that if they are not open then they should step away now.

It’s time for the Rose Ceremony, by the end of the night, seven girls will go down to six. Courtney makes her prediction on who is going home tonight, she thinks it is Emily or Jamie.

Jamie takes the chance, straddles Ben and moves in for a kiss. Ben is excited, but I can’t help thinking that he wishes it was Courtney straddled on top of him. Poor Jamie, all that anticipation and she is disappointed by the kiss. They try it again, but Jamie tells him to close his mouth until they both feel it and then they can open their mouths. Ben feels awkward and the kiss is broken.

Time to give out the roses – Jamie is heading home. How humiliating, she finally opens up to him and he gives her the boot. Clearly, she was too late. Ben returns to his girlfriends and gives them exciting news, they are heading to Belize for the week heading to the home town dates. Things heat up next week with Courtney, will Ben finally see her for the black widow that we all know her to be? Come back next week to find out.