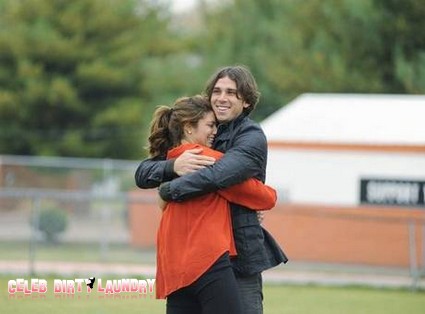 The Bachelor Ben Flajnik returns tonight with ‘Hometown Dates.’  On last week’s show we saw Ben and the six remaining women travel to Belize, where he got to chose 3 one-on-one dates.  The group date had Rachel, Kacie B, and Nicki all getting woken up at 4 am. Thank god no one was sleeping in the buff.  In the end, it’s Emily and Rachel who get sent home, and the last scene we see is devious/evil/horrible Courtney’s cunning smirk because Emily is now out of the picture. The two blonde’s leave in tears.  If you missed the show you can read our official recap here!

On this week’s show Ben visits the hometowns of his final four bachelorettes: Lindzi Cox, Kacie Boguskie, Nicki Sterling and Courtney Robertson. He meets a skeptical parent in one town and a protective mom in another. I’m dying to see the couple responsible for bringing up Courtney.  He also goes on a shopping spree before returning to L.A., where one woman learns that she will not receive a rose.

BTW – we also think there should be another show that films Ben’s reactions while watching the show. Can you imagine him watching Courtney’s behaviour – especially if she in fact is the one he proposes to?  I guess if he does propose to her – he deserves what he gets!

We will be live blogging the show with all the up-to-the-minute details at 8PM EST so make sure to come back to this spot and watch the show with us.  Refresh often to get the most up-to-date results!  In the meantime check out the sneak peek video of tonight’s episode below!

RECAP: It’s the hometown dates, the first one is with Lindzi in Ocala, Florida. Horses have always been a part of Lindzi’s life, so they begin with a horse ride around the track and a picnic lunch. Lindzi is ready to be serious with Ben and he sees that she is letting down the walls slowly. She tells him about a serious relationship, where she lived with this guy, her family didn’t like him and it ended up not working out. Lindzi is ready for marriage and hopes Ben is the last guy she has to bring home.

Ben meets the family, they sit down over some wine and have a nice talk. Ben finds out that Lindzi’s parents got married at the city hall where he and Lindzi had there first date. Ben and Lindzi get into a friendly horse race against her parents, mom and dad win. The losing team has to pull the carriage of the winning team back to the house.

Lindzi’s mom likes Ben, but she is worried, she doesn’t want Lindzi to get hurt again. Ben asks Lindzi’s mom if she feels her daughter is ready to get engaged and she says yes. Lindzi’s dad likes Ben, he approves of him and hopes something works out between him and Lindzi.

The next date is with Kacie in Clarkesville, Tennessee and she is twirling a baton with a marching band to welcome Ben to her home town. The football field is named after her grandfather, who she saw as a role model and she is trying to find someone like him for a husband. She tells Ben about the love her grandparents had for each other, her grandfather died first and grandmother shortly after from what she believes was a broken heart.

Ben and Kacie arrive at her parents house, her sister is also there with her mom and dad. Dinner is a little awkward, Kacie’s dad is on guard. Kacie gets a little alone time with her sister and she calls Ben her future husband. She goes on to say that she is tired of doing everything everyone else wants her to do, she is going to do what she wants for a change. Kacie’s dad is alone with Ben, there is a lot of tension between them, dad is very skeptacle and tells Ben that she should not rush into anything. He goes on to tell Ben that if Kacie is not the one, he should let her go sooner rather than later. Ben moves on to mom, she talks about their family values and tells him that she is concerned; she doesn’t want her daughter moving in with him if they do move forward in their relationship.

Ben is off to Fortworth, Texas to meet Nicki and her family. She takes him to boot store, she feels that finding the right boot is like finding the right partner. They leave the store in cowboy boots and hats.  Having gone through a divorce, Nicki feels like she is better prepared to be with Ben and hopes that he is not turned off when her parents state their opinions.

Nicki’s mother likes Ben and they have a better connection than she did with her first husband. Nicki’s father is not thrilled about her getting engaged again and doesn’t want to see her get hurt. She reassures her father that she wants to know all that there is to know about Ben before moving forward with him. Nicki’s dad is happy for her, they really like Ben.

Ben’s last date is with Courtney at her hometown in Scottsdale, Arizona to meet her family. She finally gains an ounce of morals and admits that she feels bad that she treated the other girls the way she did, but still feels that it was worth it. I just knew the “bitch” in her would have to come out eventually. Courtney admits that she’s falling in love with Ben. Courtney;s mother is skeptical and her sister steals her away for a private chat and leaves Ben to talk things over with her father.

Courtney’s father tells Ben that marriage is a gamble and asks him if he’s ready to take that bet. Meanwhile, Courtney tells her mother that she is falling in love with Ben.

Courtney plans a “faux wedding”, she takes Ben to an outdoor wedding setting that she has planned for him. There are a lot of chairs set up and even a minister. Courtney gets out some notebooks so that each of them can write vows and has rings all ready. Stalker??. They go up to the altar and read their vows to each other. Courtney makes me so sick, she is such a liar, there is no way she loves Ben, she just loves the attention and the prize that comes with it.

Ben is back with Chris Harrison, he tells him that he really enjoyed all of his dates. The ladies are all back in Los Angeles, they are down from 25 to 4 and now their families are involved. It’s a tough decision for Ben, one of these women are going home. Ben starts with thank the women and telling them that this is a difficult decision for him to make.

The first rose goes to Courtney, then Lindzi. There is only one rose left, it’s either Kacie or Nicki and the rose goes to……Nicki.

Kacie is heart broken, you can see it in her face. Both Lindzi and Nicki give her a hug, while the bitch, Courtney looks on. Ben walks out Kacie and she is crying, he claims that his heart is broken. He keeps telling her that he is sorry and she gets up, hugs him and leaves. Kacie had no clue this was coming and how would she, he strung her along from the beginning. Ben deserves Courtney, they are honestly both cut from the same cloth. Poor Kacie is wondering why she isn’t good enough, she doesn’t realize that she is good enough, but too good for him. She keeps asking herself “what the *uck happened”. Sadly, she didn’t get that when a guy is on a show like this and jumps in the water naked with one of the contestants, that is why this happened.

Ben is with the final three, he tells them that they are all headed to Switzerland.