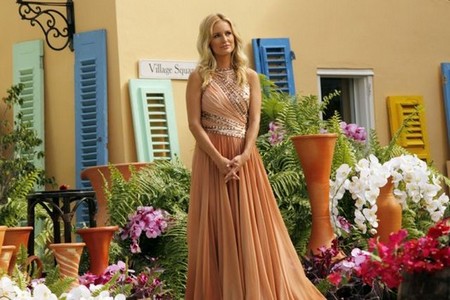 By now The Bachelorette Emily Maynard has accepted a proposal with the man she chooses to spend the rest of her life with and ABC, for the first time in seven years is going “live” for the “After the Final Rose” finale special.  Did you miss tonight’s finale?  If you did you can read our full and detailed recap here.

Emotions will be at an all time high tonight when Emily sits down with host Chris Harrison to chat live about the final two bachelors, Jef Holm and Arie Luyendyk Jr. as she reminisces about her final days in the Caribbean island of Curacao when she was torn apart after falling in love with two men.

Emily will go into detail about the two relationships and tells us how she came to her final decision that changed her and her daughter Ricky’s lives forever.

It won’t just be Emily doing all the talking though during the “After the Final Rose”, both of her final two men will also have a chance to reveal how they feel about the final outcome of the season.

In seasons past, the “After the Final Rose” special has always been taped, but this year, the show decided to go live because even though Emily did accept a proposal, there are major problems in her relationship because of  “lingering feelings” that need to be addressed before everyone can move on with their lives.

Could those “lingering feelings” affect Emily’s engagement and “happily ever after” with one of the guys? Stay tuned to Celeb Dirty Laundry for all the details tonight when it is is going to be an emotionally packed show that you won’t want to miss.

ABC will air the “After the Final Rose” special tonight at 10pm, live, for the first time ever.  Join us here at Celeb Dirty Laundry for all the final moments of Emily’s search for Mr. Right and the final stop in her journey to find true love.

RECAP: Emily is live on stage with Chris and she tells him that Jef makes her feel more confident about herself and she is truly in love. Chris notices the flashy ring and Emily tells him that no matter how nice the ring is, it means nothing compared to having Jef in her life.

They start talking about Arie, the man she dumped in the finale episode and Emily realizes that she has more to say to Arie. She goes on to say that a part of heart will always be with Arie because she did fall in love with him.

Emily tells Chris that she feels guilty that she didn’t give Arie time to find closure. Arie is on stage and he gives Emily a kiss and a hug before he sits down. Arie tells Emily that he still has love for her but understands how much she loves Jef after watching the show. Arie goes on to say that more than anything he just wanted to know why she picked Jef over him. Emily says she is sorry to Arie, he meant everything to her but she had more confidence in her relationship with Jef.

Arie says that he didn’t feel like any of the other guys meant anything to her because she gave him that confidence and that is what made it so hard.

Arie went home heartbroken, so he booked a flight back to see her in Charlotte because he wanted closure or a beginning off camera. The two didn’t meet because in the end, it didn’t feel right when he got there. Arie did call Emily and left his journal on her doorstep for her.

Emily brought the journal with her tonight and admits she didn’t read it out of respect for Arie and for Jef, she returns the journal to Arie.

Arie tells Emily that he has nothing but love for her and for Jef and wishes them the best. Emily says that she just didn’t have that long term confidence between she and Arie, but if Jef wasn’t in the picture, she probably would have picked him.

Arie says that he is doing good, he still talks to Jef because they became good friends on the show.

Arie leaves the stage and he is clearly not over Emily, no matter what anyone says – you can read it all over his face.

Jef is on stage now and Chris congratulates the couple on their engagement. Jef tells Chris all of the reasons why he loves Emily, he goes on and on. Chris asks Jef he has spent time with Ricky since the show and he says yes, they have had many secret outings.

Chris gives Emily and Jef a look back at their proposal which they have not seen yet. Chris asks Emily what took her so long to say yes to Jef when he proposed, she claims it was fear. Chris then asks Jef what he was thinking and he says that he thought she stalled because it was such a big surprise.

Jef announces that he is moving to Charlotte to get a place of his own to start his life with Emily and Ricky, then plan their wedding together. Emily hints at a spring wedding, then Chris congratulates them again and it’s all over for another season.