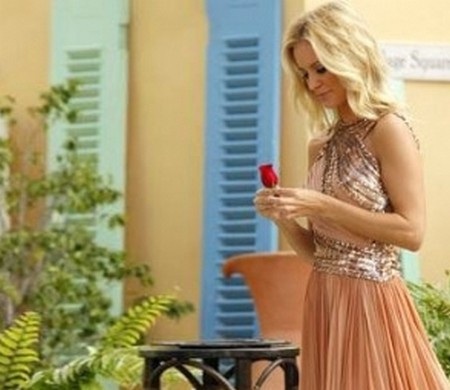 Tonight on ABC is the finale episode of The Bachelorette 2012 – Emily Maynard. We are down to the final two remaining Bachelors in the tropical paradise of Curacao. If you missed last week’s show when Emily sent one more bachelor home, we have a full and detailed recap here for you.

On last week’s show, it was time for the fantasy suite invitations. Jef Holm acted like a true gentleman and actually told Emily that he wanted to decline the invitation, out of respect for Emily’s daughter and their families.

Sean Lowe really poured his heart for Emily and actually gave her a letter that he wrote for her daughter and told her that he was falling in love with her. In the fantasy suite, the two enjoyed some time in the hot tub and then Emily sent him back to his suite because she wanted to set a good example for her daughter.

Arie Luyendyk Jr. has been lusting over Emily since day one and she was fully aware of it when she basically didn’t even offer him the fantasy suite invitation. I wonder if Arie realized that Emily didn’t trust him?

At the Rose Ceremony, Jef was the first hopeful to receive a rose. Arie received the next rose and Sean was clearly devastated and blind sided. Sean was ready to spend forever with Emily, he’s left feeling shocked and stupid after pouring out his heart to her. Emily turned on the tears and told Sean that she wanted to be with him so much because she loved every minute with him. Being the nice guy that he is, Sean left gracefully and wished the best for Emily.

On tonight’s show, the remaining two bachelors, Jef and Arie are still in the Caribbean island of Curacao with Emily and in a surprise twist that we reported in our finale secret spoilers here, rumour has it that one man doesn’t propose to Emily, leaving her to take the guy who is left standing.  We have the SPOILER HERE for you, but if you are one of those people who don’t want to know don’t click over!

Tonight’s episode is going to be a thrilling one that you won’t want to miss, so be sure to tune in for our live coverage ABC’s The Bachelorette finale tonight at 8 PM EST! While you wait for our recap hit the comments and let us know what you think of The Bachelorette -Emily Maynard so far!

RECAP: Tonight Emily’s journey to find love meets an intensely emotional end when Emily claims that she has fallen in love with two different men.

Emily is excited that her parents are in Curacao to help her with her decision. Jef is first to meet Emily’s parents, her mother is very cautious because of what happened last time with Brad Womack. Jef tells Emily’s mom that he is so ready to be a dad and a husband, he is truly committed and thinks Emily is amazing. Emily’s mom is impressed and thinks they would be a good fit. Next up, Emily’s brother Ernie, has a candid chat with Jef and after exchanging words, Jef wins Ernie’s vote as well. Time for dad to rake Jef through the coals, this is the big conversation and Jef is wanting his approval and doesn’t have any problem getting it. Emily’s family loved Jef, they had an incredible day together.

Its time  for Arie to have his meeting with Emily’s family. Unlike Jef, Arie doesn’t show up with flowers for Emily’s mom but he does bring all his roses that Emily gave him in a box. Arie is really nervous which causes him to talk and talk and talk. Emily’s mom takes Arie aside, he tells her that he has dated single mothers before and knows what to expect. Ernie asks Arie right out if he is in it “to win it”. Arie claims that he has fallen so hard for Emily and can ask her to marry him. Both Ernie and mom are confused, at a total loss of what to tell Emily to do because they like both guys. Arie goes on to tell dad that he can’t imagine losing Emily because she is the love of his life, dad gives his blessing.

Emily is looking towards her parents to help her with her decision but they like both of the guys. Emily tells her family that she is love with both men but her father doesn’t believe it. Emily is more confused and doesn’t know what to do after speaking to her family. She tells her mom that she doesn’t want the men to meet her daughter because one man won’t be continuing on. Mom tells Emily to wait on an engagement, the last thing she needs is to have three failed engagements.

Emily is on her final date with Jef, they start sitting by the beach. Emily tells him that she is really stressed out because she doesn’t want to hurt anybody. Jef tells her that the only thing he wish he had done is met Ricky. Emily tells him that she has confidence but she just doesn’t know about letting either man meet her daughter. After talking further, Emily confesses that she really wasn’t planning on introducing Ricky to anyone, but because of her relationship with Jef, she would like him to meet her.

Jef meets Ricky by the pool and when he gets in and starts playing with her, Emily is extremely happy about her decision about letting him meet her. Overall, the three of them had a great day.

Jef and Emily are at dinner and she tells him that Ricky asked if he could return tomorrow. Jef and Emily start talking about their journey and both feel that in London it all changed for them. Jef gives Emily a gift, a book about Curacao that signifies where they have come in their relationship.

The next morning, Chris visits Emily at her request and she tells him right away that she doesn’t know what to do. She goes on to explain that she introduced Jef to her daughter and now she knows without a doubt that she wants to spend the rest of her life with him. Emily starts crying because she feels so bad that she has a date with Arie today and she doesn’t think it is fair to him because she wants to be with Jef. Chris tells her to be honest with Arie and go on the date.

Emily meets Arie for their date and she starts crying, she then tells him that she felt for him on their very first date, but she doesn’t know anymore. She goes on to tell him that she always thought it was going to be her and him but it’s not. Arie is clearly very upset and Emily just continues to cry. He then tells Emily that he is shocked because he thought they had something. Emily explains that she has more confidence with Jef, Arie kisses her and gets up to leave. Emily rushes after him and he tells her good luck and thanks her for saving him the embarrassment tomorrow. She walks him out and she’s still crying, but he is not phased by it in the least.

Well, it’s true that one guy won’t be proposing, but it’s not Arie that left on his own.

On the way out in the car, Arie tells the camera that he feels so stupid and gave way more than he got back.

Emily has so much love in her heart for Jef and knows that she has made the right decision. Her connection with Jef is unlike any she has ever had in her life, she feels like he would make the best husband and dad.

Jef meets with Neil Lane to pick out Emily’s engagement ring, he is completely committed to her.

Emily’s biggest fear getting into a relationship with Jef, is that it ends like her relationship with Brad Womack. Emily is ready, she is waiting for Jef but still not sure if she will accept if he proposes to her.

Jef walks up to Emily and the two share an endearing hug, then she tells him that he is her soul mate and she loves him so much. She also goes on to tell him that he was the only one that met Ricky, furthermore, Arie is gone. Jef tells her that he feels like the luckiest man in the world, because there is just that clique that just works between them. Jef gets down on one knee and proposes to Emily, she takes a deep breath and says yes.