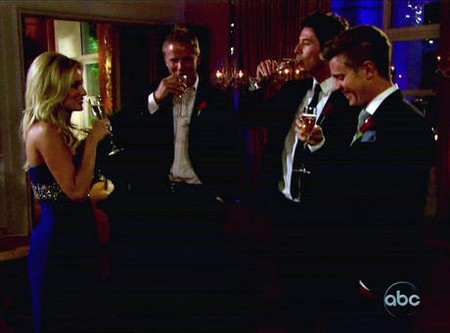 Tonight on ABC is an all new episode of The Bachelorette 2012 – Emily Maynard. We are down to the final three and the remaining Bachelors and Emily head to the tropical paradise of Curacao. If you missed last week’s show, we have a full and detailed recap here for you.

On last week’s show, Emily and her Bachelors went on hometown dates.  Emily said about the hometown dates that they are “really a turning point,” and after the dates she could be really in love with someone.   At the end of the dates Emily decides to take Chris’ sister’s advice and lets him go.  She tells a devastated Chris that her feeling have never really progressed for him like the other men and she has to let him go.  Chris was sent home and as his family feared his heart was broken.

On tonight’s show the remaining bachelors: Jef Holm, Sean Lowe and Arie Luyendyk, Jr. head to the Caribbean island of Curacao.  The three men will be vying for Emily’s heart and a fantasy suite card.

If the spoilers are correct tonight will be a crazy night.   Apparently the man who everyone thinks Emily likes the most won’t be getting an opportunity to spend time with Emily in the fantasy suite.  I wonder how Arie is going to take that?  If you want to read lots more spoilers of tonight’s show go HERE, but I warn you they are spoilers!

After tonight’s show we will be down to our final two bachelors vying for Emily’s heart.  Who do you think the final 2 will be?  Hit the comments and let us know your thoughts!

RECAP: It’s the last stop for Emily and her three bachelors after a whirlwind trip around the world. We first get to see Emily reminisce about her time with the three guys. When talking about Arie, you can see that Emily is clearly taken with him the most, wonder if she picks him? One thing is clear, these last three guys are in love with Emily and one guy is going to fall hard when she rejects him tonight. Curacao is the last stop and tonight there is the pressure of the overnight dates.

The first date is with Sean and he heads off in a helicopter with Emily, they are heading to their very own private island. Sean opens up with Emily about his past relationship when he felt he loved his girlfriend, but he wasn’t in love with her. Sean feels that he doesn’t hide his feelings from Emily, but she actually feels that he does. Emily still feels that Sean is holding back.

Sean and Emily head into the ocean for snorkeling and some kisses. Emily is wondering if Sean loves her because he hasn’t said it yet, they are now sitting down on the beach for a romantic dinner and Sean gives her a letter that he wrote for her daughter.

Sean really feels that his family affirmed how he feels about her and can’t wait to welcome her into his family. Sean pours out his heart and does In fact tell Emily that he is falling in love with her.

It’s time for the fantasy suite invitation, Emily gives it to Chris and no surprise that he tells her that he wants to head to the suite and spend more time with her. It’s on to the hot tub for the two and Emily ends up sending Chris home at the end of the night because she’s a mom and wants to set a good example for her daughter.

It’s time for Emily’s date with Jef and the two are heading out on a sailboat. Jef asks Emily if she thinks he would make a great parent and she thinks he will. It’s off to a private cove, Emily and Jef jump off the boat and head out a surf board. Emily admits that from the first night she saw something special in Jef.

Emily and Jef had a wonderful date, but Jef has a few questions that he wants to ask her and he’s save them for dinner. First question that Jef asks her is where she wants to live if they get together, she tells him that she is open and would move wherever he was. Second question, Jef wants to know why she hasn’t found a man yet. Emily tells him that she just hasn’t found anyone that had that “it” factor yet. In turn, Emily asks him the same question and he tells her that he hasn’t experienced anything that has been picture perfect like his time with her.

It’s time for the fantasy suite invitation, Jef thinks it would be awesome to forgo their individual suites, although he respects her, his family and his daughter so he gracefully backs out. Emily is thankful that Jef responded that way and the two just decide to hang out at the suite for a bit.

Arie is the last date and he confesses that he has been in love with Emily from the first date. The two head out on a boat and are doing some serious smooching. Time to go swimming with dolphins, Arie is all macho about it, but Emily is a bit afraid. Arie and Emily start talking about their favourite moments and she realizes that his are when they have kissed, which is what they seem to do mostly.

The physical chemistry between Arie and Emily is really strong, but at this point she is looking for more. Emily asks Arie what he does on a daily basis, she wants to know more about him. Arie tells her that when he isn’t racing, he gets up at 9 and heads to the shop. He loves to be around people and goes out for almost every meal. Arie asks the same question as Jef, would Emily relocate for him and she says. At the end of the day, Emily is looking for someone that would also be a father to Ricki and she thinks that Arie understands that. Emily decides not to even offer the fantasy suite to Arie which is probably a good choice since he is always all over her.

It’s time for the Rose Ceremony and Emily is sitting down with Chris who asks her if she is ready to make a decision. Emily is worried that she sees too much good in all the men that it is actually going to be hard to make a decision; she feels like she isn’t ready to let one of the guys go home yet.

Chris tells Emily that each guy has a made a personal video message for her to watch before she makes her final decision, he is going to leave her alone to do it. Emily is in tears, she tells Chris that it really sucks that she has to do this because she has three great guys to choose from.

Emily watches her videos while all the men arrive, one by one to get ready to find out their fate. Time for Emily to dump one of the guys, first thing she does is deliver a speech, then she picks up one of the roses and gives it to Jef who is absolutely thrilled. Time for the last rose, Arie gets it and Sean is devastated, he’s heading home with a rose and without Emily. Arie is thrilled that he got the last rose, but I wonder if he realizes that Emily did not trust him enough to offer him the fantasy suite invite.

Sean feels stupid, he was ready to spend forever with Emily and he’s shocked. Emily starts crying and tells him that she wanted it to be him so bad because she loved every minute with him. Sean backs out gracefully and tells her that he truly just wants the best for her.