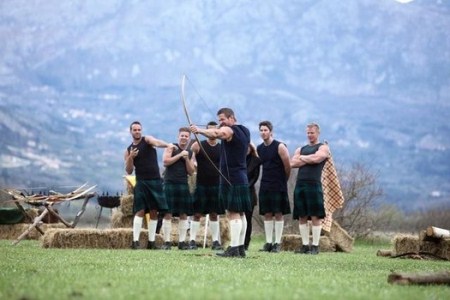 Tonight on ABC is an all new episode of The Bachelorette 2012 – Emily Maynard. Tonight Emily and her remaining 8 Bachelors head to Croatia. If you missed last week’s show, we have a full and detailed recap here for you.

On last week’s episode, Sean got the first one-on-one date that the other guys were not happy about, especially Kalon.  Kalon put his foot in his mouth by calling Emily’s daughter“baggage” and Emily went off on him in front of everyone, one,  “get the f*ck out, your mother was also a single mother, how dare you, this conversation is so insulting, it’s not even going to happen.”

The next one-on-one date was with Jeff and it goes surprisingly well considering Emily’s mood after throwing out Kalon.  At the end of the Rose Ceremony, Alejandro was sent home.

On tonight’s sixth episode of The Bachelorette – Emily Maynard, there are two one-on-one dates and the usual group date. The group date involves the men watching an advances screening of “Brave” then it is on the the Highland games.  One man squeezes in some time with Emily tonight and professes his love to her, who will it be?

Travis and Ryan get the one-on-one dates; they both go well but do they get a rose at the end of their dates? Or, did Emily pick them so she can easily get rid of them at the end of the date instead of having to do it at the Rose Ceremony. One thing is for sure, two guys are going home and there will be six left at the end of tonight’s episode. If you want to read some of our fabulous spoilers for tonight’s show, you can click HERE

RECAP:  On this leg of her journey, Emily is actually without her daughter for the first time. Her first order of business is to deliver the first date card to Travis, the card reads “look for love beyond the walls.” All the men are jealous, did we expect anything else? But Ryan thinks that Travis won’t be returning after this date.

The two head out to do some exploring  and end the day with a romantic dinner in an old fort. During dinner, Travis reveals that he hasn’t dated since his last failed relationship and this is the reason why he was afraid to open up to Emily.

The group date card arrives at the men’s mansion and the guys that doesn’t get invited is Ryan; which means he is going to get the other one-on-one date.

Meanwhile, Emily and Travis date is coming to end, she tells him basically that they are more friends than boyfriend/girlfriend, it’s hasta la vista for Travis.

It’s time for the group date and the six guys meet Emily in town. First stop is for everyone to see a pre-screening of “Brave”. Next the men have to change into kilts to participate in Highland games.

It’s archery for the guys, log toss and Maide Leisg; Emily awards the bravest guy, Chris, with a trophy. Later, Chris tells Emily that he wants a chance to fall in love with her; bonus, he gets the group date rose.

It’s finally time for Ryan’s date, Emily tries an oyster and I swear she looks like she is going to throw up. According to Ryan this is as good as it gets spending a day with Emily. One minute Emily likes Ryan, the next minute he tells her she would make a good trophy wife and turns her off.

The two head out for a romantic dinner and Ryan can’t just let go of this whole “trophy” thing, the more he says it, the more you can see that he is getting on Emily’s nerves. Now he pulls out a note, he wrote down twelve qualities that he wants in a wife; loyal, logical, encourager, faithful, nurturer, magnetic, servant, unselfish, sexy personality, someone that catches his eye and so on. Emily’s response is that she doesn’t want to be someone’s mold. Ryan looks at the rose on the table and kind of suggests that Emily gets to it already.  Emily turns Ryan down and tells her that she can’t live to his list, the most important thing to her is family and that is why she can’t give him the rose. Ryan is floored, he didn’t see this one coming.

Arie gets some alone time with Emily just after she dumps Ryan. You can really see that Emily is completely taken with him, she gives him Ryan’s rose. The two start kissing and Emily declares that her heart is so happy.

At the Cocktail Party, Emily wants to spend time with Doug and John, because she is not too sure about those two. After a candid talk between her and John, Emily realizes that she should maybe hold on to him a little longer. Now, she is sitting with Doug and when she tries to get close to him, he actually blushes. Emily tells him that she wants to be pursued a bit from him, but Doug is extremely afraid.

Doug tells her that he is loyal and honest, he has a lot to offer.

Chris interrupts and he takes Emily away from the guys for a moment. Emily takes the time think about what she is doing; her heart feels like it is being pulled in so many directions.  There are four roses to hand out, one guy is going to be heading on a plane and going home. Emily tells the men that this decision is so hard, the first rose goes to Sean, the second goes to Jef, the third to Arie and the fourth and final rose goes to…Emily leaves the room and goes to speak to Chris who tells her to do what she wants, there are no rules.

Emily returns to the men, without the rose and apologizes to Doug and John for not being able to hand out the final rose. Chris walks back into the room with two roses, she doesn’t want either John or Doug go home.  Doug looks like he is going to faint, the guy is thrilled at the outcome.

Emily tells the men that they are headed to Prague next, the perfect city to fall in love.