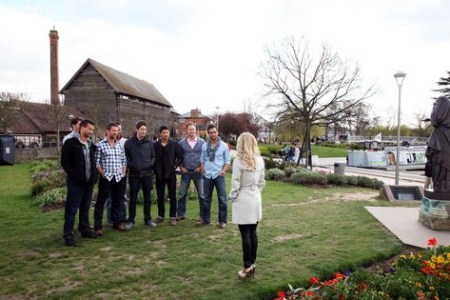 Tonight is an all new episode of The Bachelorette 2012 Emily Maynard, have you been watching the show? We have gotten our hot little hands on a preview of tonight’s episode of The Bachelorette and some juicy spoilers, enjoy!Things are just starting to get heated up and tonight Arie will admit that he is falling in love with Emily. Did you see last week’s episode, if you missed it, you can read our full recap here.

Last week, Sean got the first one-on-one date that the other guys were not happy about, especially Kalon.  Kalon put his foot in his mouth by calling Emily’s daughter “baggage”. Arie and Chris are not impressed and Doug takes it personal because he is a father and squeals to Emily.

Kalon gets put on the spot in front of everyone, he called Ricki baggage and Emily is ready to go off on him. Emily gives Kalon his own line back, “I love to hear you talk, but when I am done”. She goes on to tell him that she feels sad for him, then she says “get the f*ck out, your mother was also a single mother, how dare you, this conversation is so insulting, it’s not even going to happen.”

The next one-on-one date was with Jeff and it goes surprisingly well considering Emily’s mood after throwing out Kalon.  At the end of the Rose Ceremony, Alejandro was sent home.

Spoiler alert: If you’re one of those people who doesn’t like spoilers, stop reading NOW! We have some juicy spoilers for you about the The Bachelorette  episode 6 below!

On tonight’s episode, Emily and her remaining men travel to Croatia and on the group date the men compete in the medieval highlands of Europe.

Emily delivers the first date card herself, it’s for Travis and the couple go exploring then end the day with a romantic dinner. Ryan confides in Emily about a previous broken engagement and I don’t think she is all that impressed because he doesn’t make it further than this episode.

The group date invites the following men; Jef, John, Sean, Doug, Chris, and Arie to an advanced screening of “Brave”, then the men compete in some Highland games.

The second one-on-one date goes to Ryan, Emily has her doubts about this date but still tries to keep an open mind. They take a romantic drive then share an intimate dinner, but does it spark any feelings in Emily?

Now if the two one-on-one dates are in fact the guys that are going home tonight, that would reduce the eight men to six. So, what is going to happen during tonight’s Rose Ceremony, or will there be a Rose Ceremony? Or, did Emily perhaps give one of those men a rose and then take it back?

Don’t forget to come back tonight at 8 PM EST to get all the answers to your questions and for our awesome recap when will be live blogging The Bachelorette Emily Maynard episode 6. In the meantime, check out the preview video below.