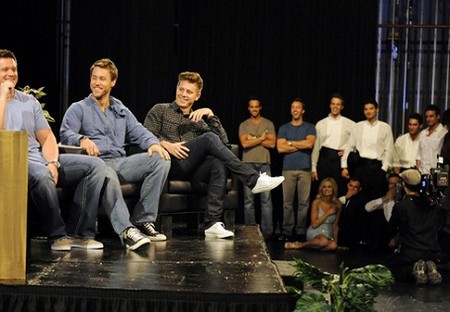 Tonight on ABC is an all new episode of The Bachelorette 2012 – Emily Maynard. We are down to the final two and tonight is the exciting and always unpredictable ‘The Men Tell All’ episode. If you missed last week’s show, we have a full and detailed recap here for you.

On last week’s show, the remaining bachelors: Jef Holm, Sean Lowe and Arie Luyendyk, Jr. head to the Caribbean island of Curacao for one last chance to win Emily’s heart. In The end Emily chose to send Sean home, Sean is devastated. He was ready to spend forever with Emily and he’s shocked. Emily starts crying and tells him that she wanted it to be him so bad because she loved every minute with him. Sean backs out gracefully and tells her that he truly just wants the best for her.

On tonight’s show seventeen of the rejected Bachelors dish about Emily and each other. Emily dishes about them as she look back at the season.  This episode is always fun, because it is always unpredictable, you never know what the men are going to say.

So it all starts out with the men who were rejected by Emily telling their side of the story as they look back their experience on the show.  Sparks will fly when the men challenge Ryan, whose arrogance irritated the other bachelors, when he tries to explain his behavior. Many of the guys were threatened by his relationship with Emily, and they definitely didn’t think he was there for “the right reasons.”

On the show tonight we will also be treated to some sneak peek’s of the season finale and also a sneak peek of Bachelor Pad that premieres next week.

Tonight’s episode is going to be explosive and one that you won’t want to miss, so be sure to tune in for our live coverage ABC’s The Bachelorette tonight at 8 PM EST!  While you wait for our recap hit the comments and let us know what you think of The Bachelorette -Emily Maynard so far!  Do you think Jef Holm and Arie Luyendyk, Jr should be in the final two?

RECAP: Jef and Arie are not on the show tonight, but the rest of the guys that Emily dumped are there. Chris had a chance to sit down with Emily before tonight’s show and he asks her, how tough was it as a single mother doing the show. Emily admits that it was tough, but getting to do her “mom” stuff with her daughter made it real for her.

Chris and Emily first talk about Ryan and how he repeatedly put his foot in his mouth with his “trophy wife” and “don’t gain wait after we get married” comments. They then go on to speak about Kaylon, who was rude to Emily when he asked her to stop speaking and also referred to Ricki as baggage. On to Doug, he made a slip up and tried to kiss Emily when she broke up with him, too little too late. Chris goes on to tell Emily that when she was kissing Arie on his  hometown date that his two younger brothers were spying on them, Emily doesn’t mind because she really felt that the two were very charming.

Chris gives us a sneak peek of The Bachelor Pad 3 that premieres next week with one of the most shocking seasons ever that will include nudity, back stabbing, love and lots of making out. There’s no guarantee that they won’t get played and payback will be in the front of a lot of the contestant’s minds.

Time for Chris to finally sit down with the guys and shows some behind the scenes footage from this season.

Chris is the first bachelor to confess how much he felt for Emily and how he was disappointed that he couldn’t take her home to meet his family. Doug and Chris start having the “25 year olds are not mature” conversation again. Kaylon tells Ryan that every man was threatened by his relationship with Emily. Chris asks Kaylon why he arrived the first night in a helicopter and Kaylon says he thought it was cool and he really doesn’t see a problem with what he did.

Charlie tells Kaylon that many times he just wanted to smash him in the face because he was so disrespectful. Kaylon doesn’t seem bothered by his comment and tells him that people he hangs out with, confident people, love the way he acts.

Time for Kaylon to sit on the “hot seat”, but first Chris takes a look back at Kaylon’s journey on the show. Chris asks Kaylon why he came on the show. Kaylon reveals that at first he didn’t know that Emily had a child, he only found out at the end and had he known, he would never have signed up. Chris goes on to ask Kaylon why he was rude to Emily and Kaylon says that he was only joking. A few of the men interrupt and say that Kaylon was only on the show for the glitz and the glam. Chris then asks Kaylon what was the most offensive thing he said and Kaylon says it’s calling Ricki baggage. Chris announces that Kaylon will be on Bachelor Pad 3 to which Kaylon tells us to “expect the unexpected”.

Ryan seemed like a frontrunner for Emily’s heart, but she dumped him and the men ended up really hating him. Chris looks back on Ryan’s   journey and we get to see when the light came on for Emily when she finally realized how smooth and fake he was. Chris tells Ryan that he comes across as an arrogant ass, but Ryan calls it confidence. Ryan admits that the show wasn’t all about Emily, it was about him finding his wife. Chris asks Ryan if there is just a possibility that he may be an arrogant ass, but Ryan says no way. Ryan admits that he wanted to be the next Bachelor if he didn’t win Emily’s heart.

Chris gets his time in the “hot seat” and we get to see a glimpse of his journey on the show. Chris is having a hard time watching the video, you can see that he is still not over Emily. Chris reveals that after Emily visited his family, he was really connected with her and just doesn’t understand still why it is over.  Chris is still willing to take a risk and fall in love again, in fact he is looking forward to it. Chris is also heading to the The Bachelor Pad 3, it will certainly be interesting when he is reunited with arrogant Kaylon.

Time for Sean to take a turn on the “hot seat”, he was the most recent guy to be dumped by Emily. A look back at his journey shows that Sean had a connection with Emily right from the beginning, but it wasn’t meant to be. Sean admits it is tough to watch, to see Emily so emotional when she sent him home. Sean fell in love with Emily and tells Chris it’s not going to fade over night, but he does see the light at the end of the tunnel.

Chris asks Emily how angry was she about what Kaylon did, she admits that she was extremely angry and disappointed that she let him slip through the cracks. Kaylon apologizes to Emily and she responds that he should be a politician because that is the biggest load of bullshit she has ever heard.

Chris asks Emily what it is about Ryan that attracted him to her. Emily admits that it was his good looks and sweet talking. Emily then goes on to tell Ryan that she hopes he finds his trophy wife.

Time for bloopers and they prove that everyone had a great time on the show.

A sneak peek into the finale of The Bachelorette shows that the two men have really fallen hard for Emily, don’t forget to come right back here to CDL for all the awesome details about who Emily picks and if she has actually found her “happily ever after”.