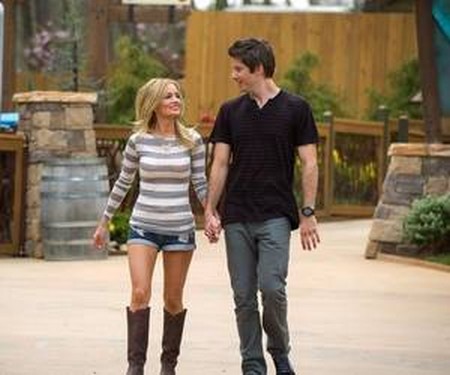 Tonight is an all new episode of The Bachelorette, have you been watching the show? Things are just starting to get heated up after Aaron and Kyle went home last week. Did you see the episode, if you missed it, you can read our full recap HERE.

Last week Kalon was sitting by himself away from the guys because he felt that there were painting him as an outcast because of his confrontation with Doug. Well, this week things are going to be a little different, Kalon paints his own impression for Emily and it’s not a good one.

Meanewhile, Chirs gets the first one-on-one date and he is going to work his butt off when he has to climb a scaling building for his romantic dinner with Emily overlooking the downtown skyline of Charlotte. The evening will end with a special performance by country music star Luke Bryan. More importantly, will Emily give Chris one more rose?

Now back to Kalon, this week Emily will see the ugly side of this guy when she spends a little alone time with him. Kalon doesn’t like to be questioned or interrupted for that matter and when Emily does just that, he says “I love hearing you talk, but can I finish first?”. Another turn off for Emily is when Kalon tells her that he wants children of his own and finds it hard to picture himself fathering a child that isn’t his. Emily is shocked and I would be surprised if she doesn’t grab this guy by the scruff of the neck and throw him out! But wait, she does tell him, “Get the f*ck out”, I can’t wait.

We’ve definitely got ourselves a villain for season 3 and oh how we love to hate them!  Now for this stupidest moment this week, Alessandro Goulart tells Emily that being a father to her child would be a compromise? Did you just here the door slam behind him? What an idiot, the only rose he will get from Emily will have huge thorns in it.

In a touching moment, eight time Grammy Award-Winner Dolly Parton serenades Emily and Arie at Dollywood.  Twelve men will be grilled by Emily’s friends and I have a feeling not everyone is going to like that.

At the cocktail party, Emily makes her feelings clearly known, it’s a rough night and only 13 will remain at the end of it. Whoever gets through this grueling night will move on to the first stop on their world tour, Bermuda.

SPOILER: (don’t read if you don’t to now)

Rumour has it that Arie Luyendyk Jr., Jef Holm and Sean Lowe are the final three, so keep your eyes on these three.  Who does Emily pick? I think it will be Jef but will he put “a ring on it”?