BY Sean O'Brien on July 15, 2012 | Comments: one comment
Related : Emily Maynard, The Bachelorette 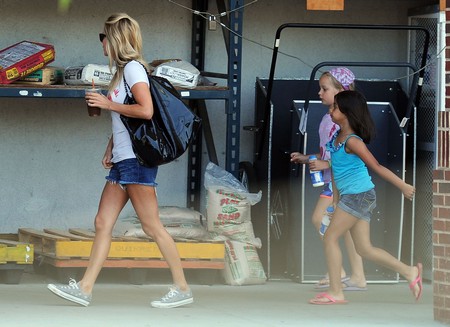 The Bachelorette Emily Maynard wants to pregnant with twins. According to sources this is what she is aiming for and is considering which of her suitors to choose as the dad. Apparently Emily wants siblings for daughter Ricki Hendrick, 7, and the sooner the better!

A source reports: “Emily plans at least three more children over the next five years, adding two at a time is a great way to  get the ball rolling.”  Even though Ricki’s grandparents are dead set against Emily’s participation on what they consider to be a low-class reality TV show, sources insist that she is a maverick who will do what she pleases.  The insider even suggest that Emily may well get pregnant again before getting married!

Since Emily has become a star she is less dependent on the Hendrick’s handouts and can call her own shots.  Emily lost Ricki’s dad, Ricky Hendrick, when the race car driver died in a plane crash.  Since then Emily has been relying on the wealthy Hendrick’s for her expensive lifestyle and loads of plastic surgery, with which she is reported to be obsessed.

Bachelorette Emily Maynard is more obsessed with babies than getting married and she wants to speed up the process by having twins! The only question is: who will the daddy be?

As The Inquirer put recently reported, the blonde single mom may not marry any of the contestants vying for art on the hit ABC show because her daughter’s wealthy grandparents are dead set against her finding a husband on TV.

But independent-minded Emily, 26, has and will possibly becoming pregnant with one of the hunks before walking down the aisle, say sources.

“Emily is a gorgeous maverick who plays by her own rules,” a show insider told the Enquirer. “She just really wants twins-now it’s just a matter determining who the dad will be.”

Emily had become pregnant with NASCAR superstar Ricky Hendrick’s daughter Ricky, seven, in 2004. Before she could break the news to him he died in a fiery plane crash. Now his parents the super-rich owners of the NASCAR racing team Hendrick motorsports , have threatened to cut Emily off if she marries one of the guys from the show, say sources.

But Emily is slated to finally choose one of her suitors in the final episode of the bachelorette which airs July 22. On a recent show segment contestant has to pretty Children’s Hospital events planner from Charlotte North Carolina house and she wanted that her family, and she blurted out: “like yesterday.”

Concluded the insider: “weddings are one thing but Emily really wants is to be pushing a twin stroller with two new little ones.  In fact, Emily is more sold on having twins than even getting married!”

Can you just see Emily having more children?  It is a tricky question.  On the one hand the woman is way too obsessed with her appearance and career.  Emily is all about being a celeb now as she hopes to parlay her popularity on ‘The Bachelorette’ into establishing herself as major TV star.  But pregnancy and children for celebs is once big place where the money and attention are these days.  Look at Beyonce and The Notorious B.I.C. –  Snooki – Kourtney and Penelope Scotland – Tori Spelling – even baby-weight challenged Jessica Simpson… so Emily must be torn.  On the one hand her beauty and career but on the other hand more babies and her career.  How to choose?   One thing you can count on – Emily’s career will come first in whatever choice she makes.