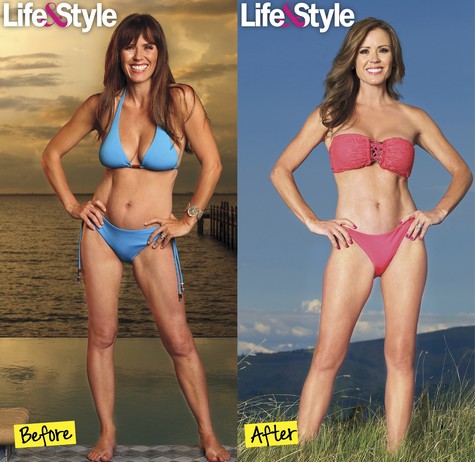 Trista Sutter was on The Bachelorette along with tears and dramatic rose ceremonies. The former star of the show exclusively reveals to Life and Style about her post-plastic surgery body and- OMG! She looks like a haunted house after a paranormal team cleansed it!

Three months before turning 40, Trista went Nip/Tuck on herself and had surgeons cut away the dodgy stuff. She says, “After nursing both my kids for a year each, my boobs were deflated and I had a droopy eye. It was something that I noticed in every picture I’ve ever taken.” Trista, not to be funny or anything, but we think you have more worries than a droopy eye after The Bachelorette. You will forever be cursed by people snickering at you in the street and saying, “Dude, how dramatic is that eye? Is it as dramatic as a rose ceremony?” The extremely lame humour will echo in the streets.

Trista’s surgeon, Dr. Franklin Rose, in Houston (the city has no relation to Whitney Houston) assisted her to decide in moving forward with plastic surgery on her eyes and breasts. A blepharoplasty (sounds like the last name of a Dancing with the Stars dancer) lifted her eyelids and removed the bags under her eyes. A breast augmentation with an internal lift increased her cup size from a small B to a full C.

She tells the magazine, “I realized that the surgery was something I had to do for myself, just for my own self-confidence and to feel good again about being in bathing suits and being intimate with my husband.” Trista met, and subsequently married Ryan Sutter, on The Bachelorette, in 2003. They have two children together who are not planning to be involved in the flower business one day.

“He wanted me to be happy, so he said, ‘Whatever you need to do to make yourself happy, go for it,'” she allegedly said with a Chris Harrison smile.

We all agree she looks hotter than clever editing!

Let us know in the comments below what you think of Trista’s makeover. How do you feel about celebrity plastic surgery?