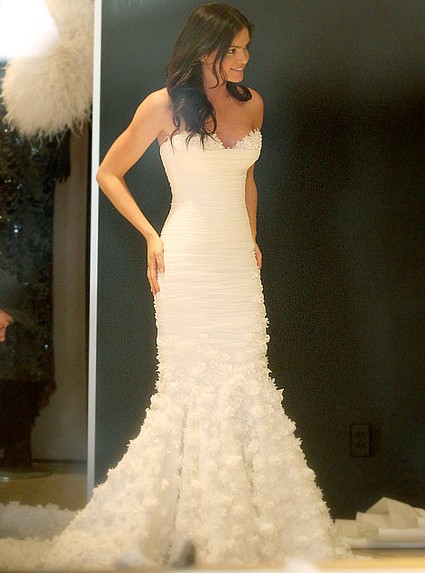 Controversial ‘The Bachelor’ villainess Courtney Robertson was seen trying on wedding dresses in Beverly Hills this week at the Mark Zunino bridal shop. The 28-year old was all smiles as she tried on multiple dresses, even one replicating Angelina Jolie’s infamous Oscar dress! Oddly enough, Courtney tried on her dresses the same day that Us revealed photos of Ben Flajnik partying, flirting and kissing three different women in San Francisco. This leaves us with one question, is this whole ‘wedding’ thingy real, or did Courtney pull a publicity stunt?

If you’ve been watching this season, you know that Courtney gets exatly what Courtney wants. Can you just imagine how pissed off Courtney was when she heard that Ben had smooched a weekend away with three women? Did she go to the bridal shop to squash the rumours? Oh yeah, I wouldn’t put it past her given her reputation for attention-seeking antics. This would be a mild one compared to baring down to her birthday suit and running in the water naked to snag Ben.

Nicki Sterling, the girl who was sent home last Monday was positively shocked by the photos of Courtney trying on the dresses, here’s what she told PEOPLE:

“I don’t even know. I’m kind of shocked right now. I’m sorry, wow, my mouth is open right now.I would hope and pray that is not the case, There are no words to describe how horrible that would be. I mean, somebody’s heart is on the line. And not just somebody’s, but it’s Ben who I care deeply about. I cannot believe that anybody – even as manipulative as Courtney – would take it that far. I would hope not.”

Wow, those are strong words, I wonder if Nicki is aware that Courtney left the bridal shop with a garment bag? Us Weekly confirmed that Bed actually did propose to Courtney in Switzerland but did the romance quickly sour? Did Ben finally realize what a real bitch Courtney was and decide to dump her? Or, are the two blissfully loving their ‘happily ever after’?.

Monday night is the “Women Tell All”. I hear there is going to be lots of drama and tears, don’t forget to come back to CDL for our full official recap, who knows, we might even shed some light on on the biggest non-shocking proposal in The Bachelor’s history.